I bought Trunature Digestive Probiotic online at Walmart and tried it every day 1-month.

In this Trunature Probiotic Review, you are going to get the low-down on my experience and digestive health results.

I will also share an amazing clinical trial that tested two of the strains contained in this probiotic. 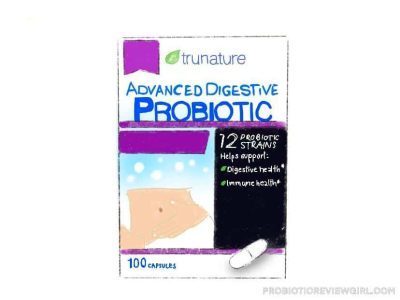 L. Acidophilus & B. Lactis are two gram-positive friendly types of bacteria that have been well studied and used in many FDA-approved probiotic supplements.

In 2020, a randomized controlled trial was published in PubMed showing the results of the trial that tested both of these probiotic strains on 330 adults with Irritable Bowel Syndrome.

They were aged between 18 to 70 years of age and were first diagnosed through Rome IV criteria. The aim was to see the effect the strains had on their IBS symptoms separately and not together.

For a total of 6-weeks 3 groups either took a placebo capsule, a capsule containing Lactobacillus acidophilus DDS-1, or with Bifidobacterium animalis subsp. lactis UABla-12 once per day at 10 billion CFU.

These are two of the same strains listed in Trunature Digestive at the same CFU count so this study gives us a clear picture of the potential outcomes the probiotic could have.

It was claimed that IBS Symptom scores improved in those that took the probiotic versus the placebo group at the end of the trial and so was stool consistency.

Symptom scores were related to abdominal pain, distension, bowel habits, and overall quality of life. No data on the cognitive or mental effects were disclosed.

An interesting manuscript published in 2014 in the World Journal of Gastroenterology compared a Low-Fodmap diet vs taking Lactobacillus Rhamnsosus for patients with different types of IBS.

The study concluded that both the low-fodmap which is a diet limiting short-chain carbohydrates and the healthy good bacteria were "efficacious when treating IBS patients".

The benefits were most notable in patients who had IBS-D (diarrhea) and IBS-A which is an alternation between diarrhea and constipation but more studies were needed so this is not a guarantee that you will also have the same results.

I did not have to deal with any side effects after taking TruNature digestive probiotics for almost a month, and the Probiotic seems to be free from allergens which are good as recently I have been having issues with Gluten.

It's common when taking a probiotic for the first time to experience initial side effects like bloating, constipation, diarrhea, increased gas, and more. This is a sign your microbiome is adjusting and usually passes.

Trunature is gluten-free, dairy-free, soy free but nothing is indicated on whether or not it is free from animal products for vegans or if it is free from peanuts. If this is an issue for you it would best not to buy Trunature's probiotic.

Where To Buy TruNature Probiotics?

TruNature digestive probiotics can be bought at Walmart, IHerb, Amazon, Costco, and other retailers. It is best to buy from Amazon as they usually offer the lowest prices and free shipping.

At present, you can buy a bottle of 100 capsules for $21.49 at Amazon (no affiliate link), which is worth 3 months of supply as the recommended dosage is 1 capsule a day. TruNature is relatively cheap when compared with other similar probiotic supplements.

TruNature also has a Women's Daily Probiotic at 25-Billion CFU and an advanced digestive supplement with 12 strains but I have not yet tried these two supplements so cannot share my personal experience.

I could not find any information about its money-back guarantee, and it seems that the company does not offer any money-back guarantee as far as I am aware. If you need something with a higher CFU count, you could try LiveConscious 45 or Garden Of Life.

Most of the reviews for TruNature Digestive Probiotics are overwhelmingly positive with a 4.7 out of 5 rating from 1,300+ customer reviews.

Captain Kirk mentions that he was able to heal his constipation, and bloating with TruNature probiotics, and found it cheaper and more effective than other probiotic supplements.

Great product at a great price.

Another customer mentioned in her review how her eczema was cured after taking this probiotic for a few days.

She was also able to treat an open wound that was not healing for almost a year despite taking all types of medicines.

Cleared up their eczema.

Although some users also had a bad experience as Patricia, she writes in her review how she became ill and suffered from a horrible stomach after taking these probiotic capsules.

TruNature Made Them ill.

Still, we must say that most customers were satisfied with TruNature Digestive Probiotics, and only a small number of customers claimed to suffer from the stomach or digestive issues after taking TruNature digestive probiotics in their review.

It's listed at a slightly cheaper price of $19.99 (no affiliate link) and features Lactobacillus Rhamnosus which is the same strain in Trunature but it does not contain any other probiotic strains.

Another similarity is that On Amazon, Culturelle also has a 4.7 out of 5-star rating making it a difficult choice between both probiotics.

One thing that Culturelle has that Trunature does not have is added Prebiotic Fiber. Culturelle contains 200mg of Inulin which is a type of chicory root extract.

Prebiotic fibers are hard to digest allowing them to sit in your large colon which your probiotic bacteria can use to feed on and grow.

Both products also make claims that they can support a healthy immune system with 70% of the immune system being located in the gut.

I have tried Culturelle and Trunature with both products giving me positive results so it's difficult to choose but one but since I have been trying to save more money recently I would go with the lower priced TruNature because I feel it had better cost value with it having more probiotic strains.

TruNature is a probiotic that is Trademarked by Costco with the following address listed on the bottle: Costco Wholesale Corporation P.O.Box 34535, Seattle, WA 98124-1535.

They do not have a website for their brand instead opt to sell through 3rd party marketplaces so it's difficult to find a lot of information on them.

If you have any issues with Trunature Digestive Probiotic you can call Costco at 1-800-840-6267 for any product queries. For any health issues, you should contact your Doctor asap. For full disclosure, I am not a doctor.