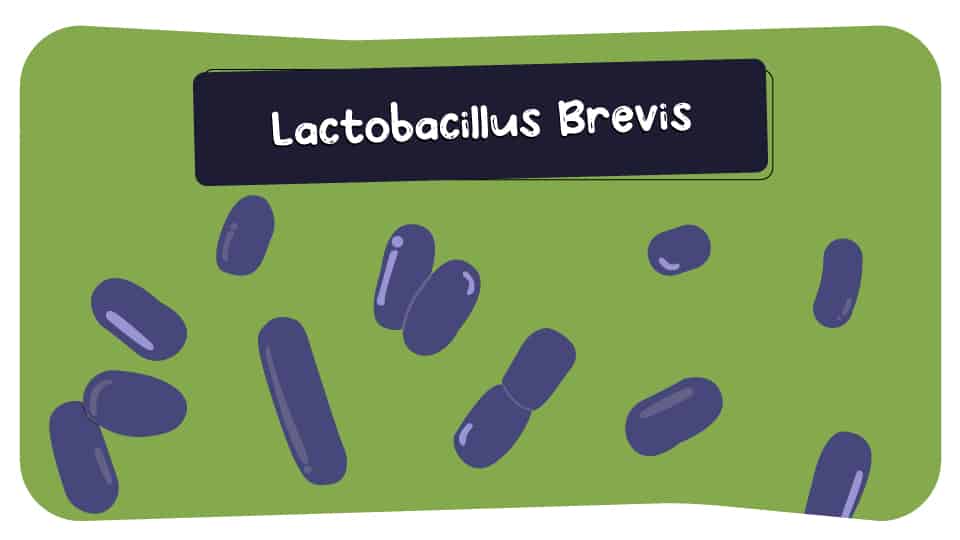 The exact origin of Lactobacillus Brevis is not well-documented, but it is believed to have been first identified by microbiologist August Gärtner with the earliest records of its discovery dating back to 1894.

Lactobacillus Brevis is a type of gram-positive, rod-shaped bacteria that is a lactic acid bacteria. In this L. Brevis guide, I will be analyzing the latest human clinical trials involving variations of this strain.

Compared to some other lactobacillus strains like Helveticus and Salivarius there aren't nearly as many studies for this strain currently in 2023. There could potentially be a lot more benefits with this strain but they currently have not been studied. I did manage to find four good studies on L. Brevis so let me share them with you now.

This 2019 Japanese study fed mice heat-killed Lactobacillus Brevis SBC8803 strain and the results showed an improvement in social recognition and other things critical to the survival of mice.

The study investigated the effects of a heat-killed strain of Lactobacillus brevis (SBC8803) on memory and adult neurogenesis in mice. To do this, the mice were fed a diet containing heat-killed SBC8803 for 4 weeks, and their memory performance was assessed using social recognition and contextual fear conditioning tasks.

The Japanese researchers also evaluated adult neurogenesis in the hippocampus by measuring the number of newly generated neurons using immunohistochemistry and the results showed that the mice fed heat-killed SBC8803 had improved memory performance and enhanced adult neurogenesis. Specifically, the treatment increased the survival, but not the proliferation, of newborn neurons.

This 2007 placebo study carried out by Italian researchers from the University of Rome looked at the anti-inflammatory effects of Lactobacillus Brevis (CD2) probiotic bacteria on 21 patients with chronic periodontitis and 8 in a control group.

The results showed that treatment with L. brevis led to a significant reduction in inflammation, as evidenced by decreases in nitric oxide, prostaglandin E2, matrix metalloproteinase, and gamma-interferon levels in saliva samples. Overall the was an oral Anti-inflammatory effect noted.

The Italian researchers suggested that these effects may be due to the presence of arginine deiminase in L. brevis, which prevents the generation of nitric oxide. These findings provide new insights into the molecular basis of periodontitis and suggest that L. Brevis may be a potential treatment for this condition.

This placebo-controlled study published in 2012 by Japanese researchers conducted a clinical trial to investigate the effects of a Lactobacillus Brevis KB290 at Billion CFU on symptoms and quality of life in 35 adult patients with irritable bowel syndrome (IBS).

Another 2013 study also from Japan had 32 Japanese women with a tendency for constipation take Lactobacillus brevis subsp. coagulans strain at 1 billion CFU for several weeks.

It will be interesting to see if any more studies on Lactobacillus Brevis show up in the future. If you find any that I missed please mention them in the comment section.

I must admit that I feel great after taking Probiotic Supplements containing Lactobacillus Brevis. Taking a multi-strain probiotic supplement may be the smartest thing to do if you are not sure whether L. Brevis can help you or not.

As always, nothing in this guide is medical advice. I am not a doctor. You should always contact a medical professional and not use Lactobacillus Brevis in place of any medical prescriptions.