7 years ago, I suffered painfully with gastritis before learning about the benefits of friendly probiotic bacteria.

I suffered with Gastritis so much that I ended up at my local hospital laying on a bed sedated with a camera rammed down my esophagus.

The one piece of advice I would have given to young Alicia Harper (that's me) would have been to work on my diet and starting taking probiotic supplements ASAP.

This guide will explain why probiotics helped with my superficial gastritis.

What Probiotic Strains For Gastritis? 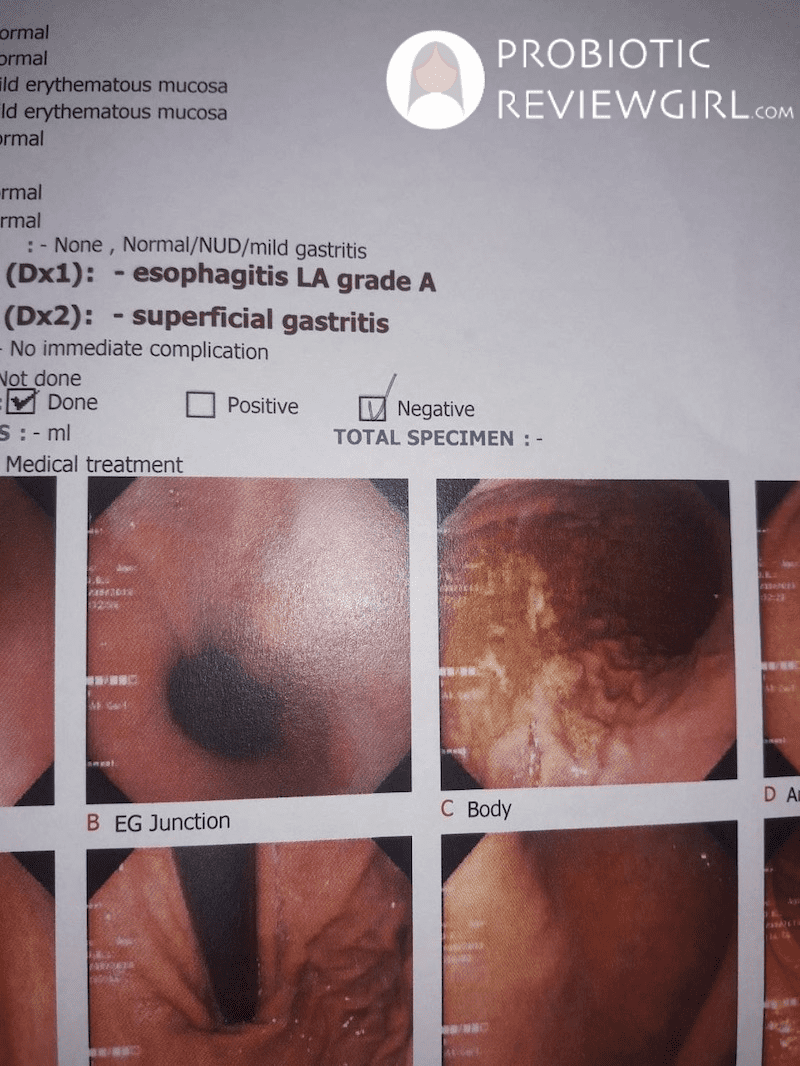 Photos From My Gastroscopy

There are two major ways that probitoic's may help with Gastritis and they are through the anti-inflammatory effects and if your gastritis is H. Pylori induced then through anti Anti-H.Pylori effects.

I have spent hundreds of hours reading through probiotic bacteria studies and will share some of the more promising Lactobacillus studies with you now. Some probiotic strains like Bifidobacterium bacteria haven't been studied as much but still may help.

This study set out to test the anti-Helicobacter pylori (H. pylori) and anti-inflammation effects in 40 mice that were infected with murine gastritis. The forty mice were split up into 4-groups.

The results were pretty clear cut and showed results with the Lactobacillus groups. There was release of mucosal inflammation in gastric antrum and gastric body in lactobacillus treated groups.

The abstract of this study quite simply said that Lactobacillus plantarum ZJ316 survived stomach conditions well and was able to have anti-H. pylori ability.

The interesting thing about this study was that it said the L. Plantarum strain repaired mucosal damage which is super important for those with gastritis.

This study found that the Lactobacillus Fermenti strain was able to work against H. Pylori infection thus improving H. Pylori gastritis in mice.

The study was done in mice so it's not clear if these results could be carried over into humans who have H. Pylori induced gastritis but it does further boost evidence for Lactobacillus probiotic bacteria.

Unfortunately not every Lactobacillus Strain has been studied for gastritis, potentially due to lack of funding and interest. Many Lactobacillus bacteria have however been shown to provide anti-inflammatory effects and help with abdominal pain.

According to Livestrong.com, A strong probiotic population in the GI tract can have an anti-inflammatory effect, which may improve the symptoms of gastritis.

Lactobacillus Gasseri was studied on 10 mice with Colitis which is inflammation of the inner lining of the colon. This lining inflammation is similar in a way to Gastritis. The study noted that all mice had inflammatory markers reduced at the end of the study.

Lactobacillus Reuteri was studied on 44 human participants with Diverticulitis. The study found that the L. Reuteri probiotic strain helped with the abdominal pain from Diverticulitis and also reduced inflammatory markers which may help with similar pain from Gastritis. 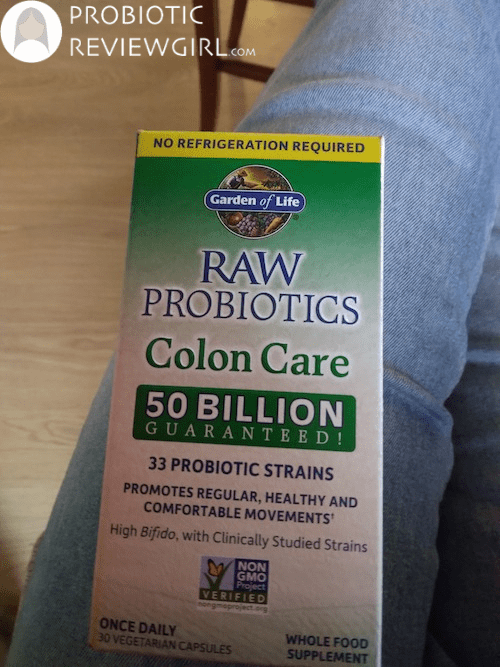 Garden Of Life have been creating probiotic supplements for many years and their Colon Care supplement impressed me when I tried it. It has 33 different probiotic strains and claims to guarantee 50-billion Colony Forming Units.

Colon Care from Garden Of Life isn't made for Gastritis but has some great Lactobacillus & Bifido Bacteria that may help with bowel movements. Colon Care also contains prebiotic fiber from wild kefir cultures.

It's Non-GMO, doesn't require refrigeration, gluten free, vegetarian and the customer reviews on a whole are awesome. I tried to find some customer reviews for Gastritis but couldn't find any but I did read one review from a user called BlackBrownBeige who said it help with their Ulcerative Colitis which is similar to a gastric ulcer from gastritis. 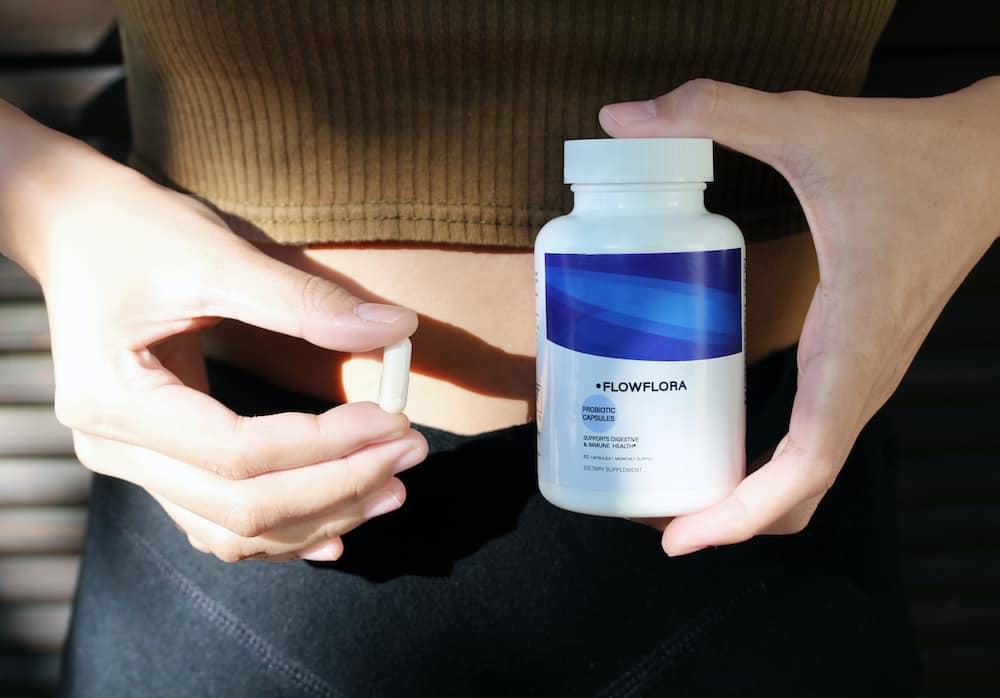 I spent hundreds of hours choosing the probiotic strains that gave me the best digestive results and included prebiotic fiber to feed the probiotic bacteria. I coated the capsules in a substance derived from natural brown seaweed too make sure that they can survive the harshest stomach acid conditions.

One bottle with 60-capsules currently costs $39.95 and shipping is free for PRG blog readers. You can also save 15% today with coupon code "GASTRITIS" for a limited time here. I have a 365-day money-back guarantee and you can email me anytime.

FlowFlora features Lactobacillus Probiotic Strains that have been studied and shown benefits for H. Pylori and reduced inflammation. Both of these things can be major components in Gastritis.

Some negatives about my probiotic are that shipping outside of the US is quite slow, it's not the cheapest option and it isn't loaded with multiple different bacteria strains. I went for quality over quantity 🙂 You can read my FlowFlora review here. 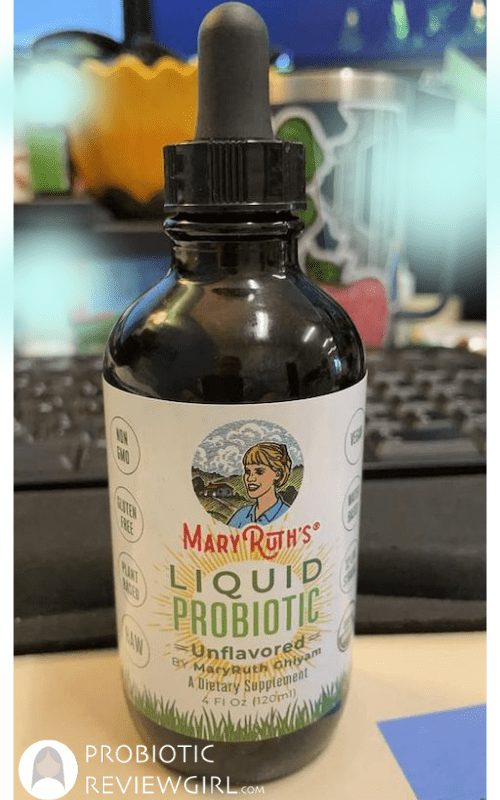 For some following a bland diet for gastritis may require more liquids than usual and in that case Mary Ruth's unflavored liquid probiotic might be the best option.

I liked Mary Ruth's a lot when I tried it and appreciated that there wasn't any strong flavor. One bottle is quite small but lasted me a long time. The only thing I didn't like was that with 625,000 CFU per spray it wasn't strong enough for my gastritis.

Mary Ruth's probiotic has a lot of good Lactobacillus bacteria and contains L. Acidophilus which as mentioned previously is one of the top stains for gastritis. It also has a bunch of Bifidobacterium strains that haven't been studied. If you take Mary Ruth's liquid you will need to get your prebiotics from other sources as it does not contain prebiotic fiber. 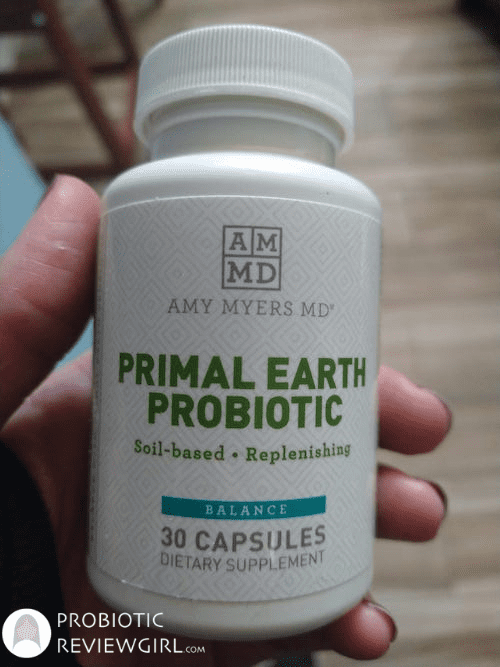 Primal Earth Probiotic is a supplement from Dr. Amy Myers MD that features 3 soil based spore forming bacillus probiotic strains. While these strains have not been studied for Gastritis I decided to include it in this guide for two reasons.

Amy Myer's has some great reviews and I read some customers saying that Primal Earth helped with their colitis and acid reflux. It's only 3 billion CFU per-serving and it's price point is on the higher end but the ingredients are high-quality and unique.

Unfortunately it doesn't contain prebiotic fiber which is important for probiotic bacteria to grow. Primal Earth does not need to be refrigerated and comes with a 90-Day money back guarantee. It's non-dairy, gluten-free, keto, paleo but not vegan. 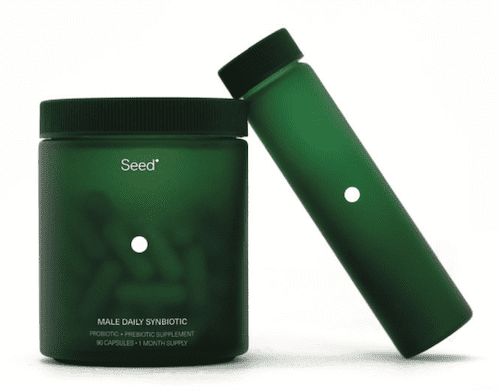 I have to be honest and say that I have not yet tried Seed Probiotics since I have mostly been put off by the high price tag but hopefully I can soon. They have an impressive inner and outer capsule that survives stomach acid made from punicalagins concentrated from Indian pomegranate.

Seed Probiotics has some super unique probiotics strains that I have not come across before in any other supplements and they measure in a more accurate AFU compared to CFU which they claim is less accurate. All 24-strains in this probiotic are clinically tested.

The strains may help with gastritis because of the gut barrier integrity & gut immunity benefits. Seed Probiotics seems super impressive on the surface and it's clear they have innovated on many fronts. I do wonder though, if its a bit over-kill. Some good old well studied Lactobacillus Acidophilus may work better or the same for Gastritis. Their Facebook page also shows a 3.9 star rating which isn't great. 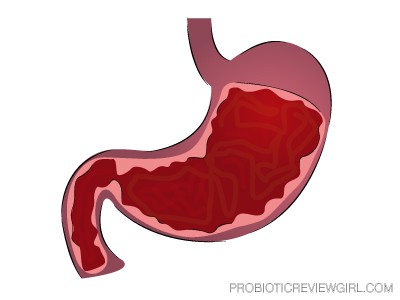 Gastritis is quite simply the inflammation of the stomach but I will explain in more details why this happens. To succusfully digest food the stomach has to produce a large amount of stomach acid.

This can lead to problems like gastric & peptic ulcers which happen when the stomach acid touches unprotected stomach lining. It can also cause symptoms like upper abdominal pain, bloating, belching & more.

For a lot of people the biggest trigger of gastritis is their diet and the following foods & drinks may worsen gastritis symptoms.

The cause of Gastritis however most of the time is, Helicobacter Pylori. (I tested negative for this). This is because the H. Pylori bacteria can eat into the stomach tissue and cause a chronic inflammatory response in the gastric mucosa

Non-steroidal anti inflammatory & asprin pills can also lead to gastritis. When NSAID's reach the stomach they dissolve into small particles and release a chemical called cyclooxygenase and this can be quite damaging to stomach cells which produce a protective mucous. Auto-immune reactions, stress, bile reflux & alcoholism are also causes of gastritis.

Why Probiotics May Help With Gastritis

I have dug through hundreds of probiotics studies here on the PRG blog and have learnt that many Lactobacillus strains have been studied to show potential benefits on inhibiting H. Pylori and reducing inflammation in the body.

Probiotic's May Also Help With

Because people with gastritis and acid reflux may have large amounts of stomach acid floating around it may be hard for probiotic bacteria to get passed the stomach and to the large intestines so make sure to eat acid resistant probiotics.

In the /r/Gastritis sub reddit a user by the name of thefoxinthesnow7 claimed that they were finally healing their gastritis with the help of probiotics. They said they had been living in hell for several months due to severe epigastric back pain, burning from gastritis and peptic ulcer. They had a followed a bland diet with out much success but since starting Align probiotics their gastritis pain is only 20% of what it previously was.

Several years ago SaraELa91 shared their success story with using more fiber and probiotic supplements. For their entire life they had dealt with constipation, severe abdominal pain, GERD, IBS and good old Gastritis. They discovered they were H. Pylori positive and were prescribed Clarithromycin & Metronizadole for 14-days. Later, they then took fiber, prebiotics and acidophilus probiotics for 8-weeks. Because of this for the first time in 20-years they have come off their Prilosec and their gastritis vanished.

In another /r/Gastritis sub reddit thread 2-years ago NaijaSiKe started a thread called "Probiotic Pills?" and started by asking if anyone had tried them for Gastritis. They mentioned they were following prescribed treatment and their Gastritis started after they finished a course of Antibiotics. For this reason they felt their Gastritis may have been related to the gut microbiome.

Jmeza805's comment was the most liked and they said that they take probiotics but weren't sure if they would be able to help with Gastritis pain but they had made their bowel movements more regular. One user called Rick Sanchez said that probiotics should definitely help if their gastritis was caused by antibiotics and this is something I agree with because of how they work.

Gastritis can take months to heal and will take some serious dedication. You will need to focus on your diet heavily and cut out trigger foods for a long time.

It has also been suggested that following intermittent fasting may give your stomach periods of time to heal. Following a bland diet & fasting can set a good base for probiotics to work.

Probiotics should not be used alone to treat gastritis and will not be enough alone in most cases. You may need anti-biotic's or PPI's depending on the cause so it's important to first consult with a Doctor. I am not a doctor.

Probiotics can however be a very important tool in your kit and they have helped me big-time with reducing inflammation in my stomach. Rarely, when I don't take probiotics I can feel my inflammation & gastritis creep back into my stomach.