What Probiotic Brand To Take After Antibiotics in 2022?

After recent 4th of July celebrations, I ended up in bed with a 104 fever, the worst diarrhea, and stomach cramps.

I had eaten or drank something and ended up poisoning myself with some bad bacteria. I eventually up visited my doctor for some advice and a stool test confirmed everything.

When my Doctor said I would need to run a course of Doxycycline Antibiotics, my heart sank. I knew that would mean my healthy microbiome would be wiped out. My years of hard work eating probiotic-rich foods would now be for nothing.

In this guide, I'm going to share what I did and am doing to rebuild my microbiome and what probiotic brand I will be using.

The Difference Between Probiotics & Antibiotics 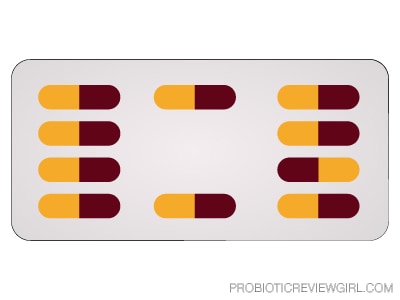 Antibiotics work in two ways by stopping the reproduction of all bacteria and straight up killing the bacteria which gives your immune system a chance to work better. They may start to work straight away after taking them but take several days for you to feel better.

Probiotics are totally different in that all they are is friendly bacteria that you can send through your digestive tract to your intestines and then multiply with prebiotic fiber. The probiotic bacteria MAY help fight off bad bacteria as well but they can take up to a month to work.

Can You Take Probiotics And AntiBiotics Together?

This article from Blake Rogers, MD, Kate Kirley, MD & Anne Mounsey, MD in the Journal Of Family Practice gives some great insights on taking both Probiotics and Antibiotics.

It starts by suggesting doctors should advise patients to take probiotics during the entire course of antibiotic treatment to prevent diarrhea. Interestingly however diarrhea may also be a side effect of probiotics.

Taking Probiotics & Antibiotics Together Is Advised And May Help!

It has been well documented in the past that antibiotics may cause diarrhea for many people and there have been separate studies that confirmed some probiotic bacteria like Lactobacillus, Bifidobacterium & Saccharomyces helped with antibiotic-associated diarrhea.

Best Probiotic Brand For After Antibiotics 2022 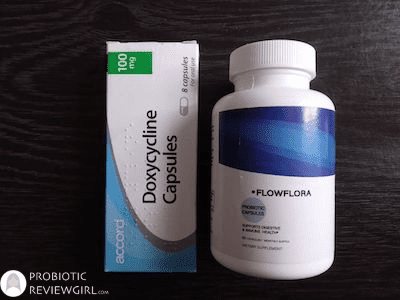 Since launching FlowFlora to the public it has been humbling to read so many amazing customer reviews and be able to help people with so many different issues. You can use coupon code antibiotic for 15% off.

When choosing a probiotic to use alongside Doxycycline antibiotics, I chose FlowFlora from my brand Alicia's Naturals. It's a 4-strain, 40-billion CFU probiotic that also has prebiotic fiber.

For full transparency, I must disclose that other probiotic brands like Garden Of Life, Seed Probiotics, and Amy Myers will also work. Along with FlowFlora I am also eating plenty of Kimchi and drinking Kefir milk twice per day. It's also totally fine to not buy any expensive probiotic supplement and just get probiotic's naturally 🙂

How Far Apart Should You Time Probiotics And AntiBiotics?

The previous article suggested taking the probiotic supplements a long side your antibiotic treatment but didn't offer any guidance for timing but did seem to hint at just taking it along at the same time to prevent diarrhea.

The good news is that probiotic bacteria will not hinder how well the antibiotic works and Dr. Hoberman offered some guidance backing this up. Dr. Hoberman suggested taking the antibiotic or probiotics 2-hours apart to give either a chance to pass through the intestines first.

One of my favorite ways to research complicated matters is to use the Explain Like I'm Five (ELI5) subreddit. It's where you can get a complicated question explained easily enough for a 5-year-old to understand.

In the ELI5 Subreddit on Dec 29, 2019, BurkeyBurkey wanted to know if their probiotics and antibiotics would cancel each other out.

8 Years Ago in the ELI5 subreddit a user wanted to know if taking Antibiotics would make their probiotic supplement redundant by killing the beneficial probiotic bacteria.

One user who has now deleted their profile stated that the antibiotics might kill off some of the newly added bacteria but it also may not since different bacteria react differently.

They said if you keep taking probiotic bacteria you can eventually shift the composition of bacteria in your microbiome. This also backs up my point of continuing to take probiotics even after you have finished your course of antibiotics.

The Argument For Not Taking Probiotics & Antibiotics Together

I had to look very hard for a legitimate source arguing against taking both substances together and I nearly didn't find anything.

In the spirit of being impartial and making this the most informative guide possible, I am going to mention this Israeli study even though I think it's extremely flawed.

The clinical trial tested people after they had followed a course of antibiotics and had them try an 11-multi strain probiotic supplement. It was claimed that those who didn't take the supplement had their microbiome flora return to normal faster than those who took the probiotic.

Next Guide: L-glutamine and Probiotics Study For Leaky Gut

The major flaw in this study was that only one probiotic supplement was studied and we don't even know if it was resistant to stomach acid or what diets those who didn't take the probiotic followed.

We also do not know what kind of state their glut flora was in before antibiotic usage which is important as a vegan diet may lack dairy foods that are high in probiotic bacteria.

Closing Thoughts: Talk TO Your Doctor

It's clear that more studies are needed on the effects of probiotics and antibiotics on the microbiome and some Doctors like in the JRE podcast clip don't seem to understand how probiotics work in depth.
My advice would be to first get a check-up from your Doctor and follow all prescribed advice! Try to use probiotics once per day in the morning several hours after you have taken your antibiotics. This is when your stomach acidity will be at its lowest and give your gut the best chance of letting the probiotic bacteria grow. Do not take your probiotics with hot liquid or vinegar.

The consensus is that it's safe to take both together and people like Dr. Hoberman suggest waiting for at least 2-hours between both. Never use probiotics as a replacement for antibiotics and always consult with your doctor first if you plan to use both. I am not a doctor and this guide is purely informational.