Should I Take Probiotics Every Day?

I had an email from a reader yesterday asking if they could take their probiotic supplement every single day.

They were worried that they may either overdose on the probiotic or become addicted.

These are both genuine concerns and in this guide, I will be answering their questions and making some arguments for taking probiotics every day.

The main argument for taking probiotics every day is that modern daily life for most people has a such a negative impact on the health of the microbiome and the diversity of probiotic bacteria.

In the past before the revolution of the food industry, there wasn't so much damage on a daily basis. The human body is not able to produce probiotic bacteria by itself so if the damage is done we need to help it by feeding it probiotic bacteria and prebiotic fiber.

Also aside from those reasons, one study even suggested that after stopping probiotic supplementation the bacteria can exit the body but more research is needed and different lactobacillus strains like Lactobacillus Rhamnosus & Lactobacillus Reuteri don't all react in the same way.

Studies have shown that antibiotics like tetracyclines are commonly used in beef products that are sold directly to humans. Mary Jane Brown, Ph.D., RD, and Rachael Link MS, RD from Healthline stated that experts believe that;

To boost the validity of this statement, It's not known who these experts are, who pays these experts, and where the human clinical studies proving that antibiotic usage in meat doesn't harm human gut health are. It's generally advised by Doctors to take a short dose of probiotics after antibiotic usage.

It's well documented that normal antibiotic usage is a major disruptor for good bacteria in the gut and it is essentially flushed out when taking antibiotics. If you eat a lot of meat daily it may be worth also taking a probiotic supplement to replenish any damage done to the gut flora.

This article from 2012 in the national library of medicine confirmed that recent studies showed changes in gut microbiota gut flora was changed by chlorine in drinking water.

This makes sense when you consider that the job of chlorine in water is to kill off all bad bacteria. Unfortunately, chlorine can differentiate between good and bad bacteria.

Dr. Sam from WellandGood stated that we don't actually know how much chlorine it takes to kill the good bacteria in the gut because of lack of studies. To be safe, if you drink tap water daily you could either boil it or take a probiotic daily to counteract any potential harm down to your gut flora from the chlorine.

The reason for that is that probiotics take time to work and the results do happen instantly. There are cases where a probiotic may help in a short time. like in this diarrhea probiotic study where participants took a probiotic twice per day for 1 week.

Most of the time probiotics work best when taken daily in the morning over a longer period. This is because it takes time to populate the microbiome and for the bacteria to grow and multiply in the large colon.

The effects of artificial sweeteners on the human microbiome have been well researched according to this 2019 review. In recent years sugar-free foods have gained popularity due to the fact they are low in calories and people are more conscious of their weight.

New developments in the food industry must be well studied in case they can affect human health negatively. This review confirmed that saccharin and sucralose (NNSs) and stevia (NS) were both able to change the composition of the gut microbiota and not in a good way.

It was also stated that the natural sugar Xylitol found in fruits and plants was able to reduce the abundance of bad bacteria and increase butyrate all while avoiding signs of mucosal inflammation that are associated with leaky gut.

If you eat or drink soft drinks, baked foods, candy, canned foods, and even some forms of dairy then you could be eating saccharin and sucralose artificial sugars that damage your gut. Taking a daily probiotic in this case could help to support the health of your microbiome.

Can You Overdose On Probiotics? 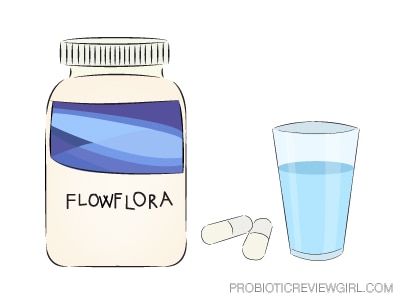 There is not one study that has ever indicated or shown anyone to overdose from probiotic usage. When taking a strong probiotic you may experience initial side effects like diarrhea, bloating, or gas but probiotic supplements are dietary supplements that have been shown to be safe more most people time and time again.

With things like laxatives, it is possible that your gut can become "lazy" and dependant on the laxative resulting in some form of dependency. People sometimes confuse probiotics and laxatives as the same thing because of similar poop-inducing effects but they are fundamentally different. Daily use of probiotics will not make your gut lazy, make you overdose, or make you addicted.

Who Should Not Take Probiotics?

Whilst taking probiotics are safe for daily consumption based on countless use in studies it is however important to know that a minority of people should not take probiotics even for just 1-day.

That includes people who are immunocompromised, taking Immuno-suppressing medications, have serious health issues, allergic to any ingredients, and are sometimes vegan if the probiotic capsule contains dairy or types of gelatin.

This is not a full list and there may be more medications that interact with probiotic supplements. IBGard a popular IBS dietary supplement, for example, contains peppermint oil and essential oils that have been shown to potentially reduce the efficacy of some probiotic bacteria.

My advice would be to always consult with your doctor first before taking a daily probiotic supplement. They will know your medical history and any medications you may be taking.

Many scientific studies I have shared in this blog post have shown that modern-day life can have a negative impact on the microbiome and general gut health without you even knowing it.

As always, you can eat fermented foods like kimchi, sauerkraut, kefir, kombucha, and miso daily without issues. Many people already do this without issues like in South Korea for example where Kimchi is a part of daily life. I am not a Doctor and this blog post is not medical advice.