Probiotics for Acid Reflux and GERD (2022)

Before I learned about gut health and the microbiome I had a horrific diet. I drank way too much coffee, ate right before going to sleep, was overweight, and checked every box for acid reflux.

I have researched the relationship between probiotic bacteria and acid production and will be sharing some of those findings with you in this guide. Thankfully, I no longer have acid reflux. 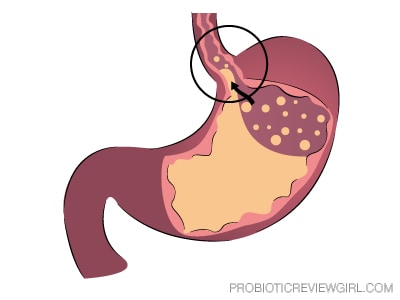 This journal states that Gastroesophageal reflux disease has a negative impact on quality of life and leads to expensive health care costs. According to the NIDDK, at least 20% of the US population may have Acid Reflux (GERD) so it is prevalent in society.

In this randomized clinical control trial from China, 134 patients with Reflux Esophagitis were split up into two groups. The first was given 20mg of Esomeprazole PPI daily for 8-weeks along with a probiotic supplement that contained Bacillus Subtilis and Enterococcus Faecium probiotic bacteria.

The second group was also given 20mg of the PPI but instead of the probiotic bacteria, they took a placebo. Those who completed the 8-week trial were asked to fill out a reflux diagnostic questionnaire but there was no difference between both groups in the questionnaire.

The other results that were interesting were that a Gastrointestinal symptom rating scale score was lower in the Probiotic group and so was small intestinal bacterial overgrowth. The study claimed that combining probiotics with Esomeprazole may be beneficial.

In my opinion, I think this study was poorly done because the probiotic strains used weren't great. It would have been better if they had used Lactobacillus bacteria and secondly I think that self-reporting scores doesn't always provide accurate results. No information on diet was given either.

This study claimed patients over the age of 65 taking Lactobacillus Reuteri had lower levels of abdominal pain and indigestion after 8-weeks of taking the probiotic but some other markers showed no improvements.

This next study enrolled 24-outpatients who had taken PPI's every day. They were asked to eat a Lactobacillus gasseri OLL2716 yogurt every single for 3-months and the conclusion was this lowered their GERD symptoms.

Other probiotic strains good for acid reflux symptoms include Lactobacillus Acidophilus & Bifidobacterium Infantis. It's also important to make sure you get prebiotic fiber into your diet from vegetables like dark leafy greens, asparagus, and bananas. Some of these foods may also help neutralize stomach acid according to HopkinsMedicine.

Why Do Probiotics Help With Acid Reflux?

Most studies indicate that most probiotic bacteria don't stop the production of acid but instead can ease the symptoms of acid reflux and help with PPI side effects. There were some outliers though.

In a Japanese study, Lactobacillus Johnsonii was shown to inhibit gastrin-mediated acid in mice but it's unclear if these effects can translate into humans and it wasn't stated if this was done in the same way that PPI's work.

It's also impossible to find probiotic supplements that contain the L. Johnsonii probiotic strain. In the study, the strain was taken from the gastric juice of a healthy Japanese male volunteer.

What Is Acid Reflux (GERD)?

Acid Reflux is a disease in which the acid from your stomach flows back up the Esophagus pipe that connects your mouth to your stomach. It may also be called pyrosis, heartburn, dyspepsia, or indigestion.

Your stomach acid shouldn't normally flow back up the Esophagus and because of that various uncomfortable symptoms may occur when the acid irritates your Esophagus, Throat, and more.

This is not a full list of Acid Reflux (GERD) symptoms and they may be easily confused with other conditions so it's important you consult with a doctor for any health queries. I am not a doctor.

GERD is when Acid Reflux becomes chronic and has similar symptoms to Acid Reflux. When it's chronic though it can lead to serious conditions like Esophagitis, Barrett’s esophagus, and adenocarcinoma.

What Causes Acid Reflux And GERD?

Acid Reflux and GERD doesn't happen for no reason and usually will be a result of your lifestyle choices. The following put you at risk.

If you don't fall under any of those categories then a hiatal hernia could also be a cause for Acid Reflux and GERD. If the Hernia is big enough it may allow acid to move back up your Esophagus but most of the time the Hiatal Hernia doesn't cause many symptoms. Other causes include H. Pylori infection and Zollinger-Ellison syndrome (ZES). According to the functionalgutclinic, SIBO may also lead to positive reflux-symptom association for regurgitation.

While probiotics may induce temporary side effects the good news is that increased acid is not one of them and probiotics won't make your Acid Reflux or GERD worse by increasing stomach acid.

Side effects from probiotics are more likely to occur from higher CFU supplements and if you don't already have a lot of probiotic bacteria in your microbiome.

If you want to limit probiotic side effects start slowly and choose a lower CFU probiotic. If you a supplement recommends two capsules per day you could also just take one capsule.

If you are immunocompromised never take probiotics and it is always wise to consult with a doctor first if you are trying something new. I am not a doctor and this guide is not medical advice.

Organic yogurts can be high in bacteria like Lactobacillus Plantarum and over time may help to nourish your microbiomes. Unfortunately according to some sources yogurts is a big no for those suffering with acid reflux as dairy is high in fat and can make heartburn worse. Ice cream may even change how the esophageal sphincter functions.

What Probiotic Supplements May Help?

The next best option is to look for probiotic supplements that contains Lactobacillus & Bifidobacteria probiotic bacteria strains. Some good options include Garden Of Life, Natures Bounty & FlowFlora.

Lifestyle changes are the best way to go to help with Acid Reflux & GERD a long with PPI's like omeprazole but probiotic supplementation may offer some assistance in your journey.

Probiotic supplementation can help ease some of the side effects from acid reflux and may help to keep the microbiome in your esophagus and gut diverse with good bacteria that may have an anti-inflammatory effect.