In this guide, I will be sharing some of the latest research into probiotics for SIBO and letting you know what the experts have to say.

You will learn what impact specific strains may have on the small intestines and gastrointestinal tract and what could make SIBO worse. 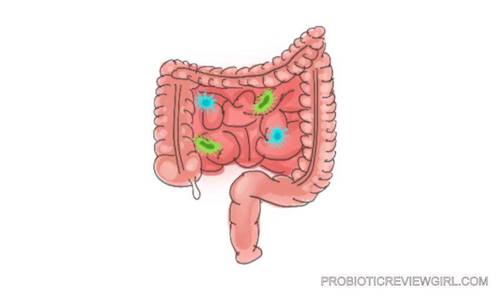 Small Intestinal bacterial overgrowth or SIBO is a condition that usually affects the small intestine. It mainly occurs when there is an abnormal growth in the number of bacteria in the small intestine and usually involves bacteria that are not commonly found in the human gut. SIBO can lead to severe pain, malnutrition, and diarrhea.

Constipation, diarrhea, severe pain in the stomach especially after eating something, indigestion, cramps, bloating, gas, and a regular feeling of fullness are the major symptoms of SIBO. It can also lead to unexpected weight loss.

Small Intestinal Bacteria Overgrowth or SIBO is usually treated by a combination of antibiotics such as ciprofloxacin, rifaximin, metronidazole, and dietary changes such as avoiding gluten products, eating a balanced nutritious diet, and eating smaller meals at regular intervals.

As probiotics may restore the balance of good bacteria in your gut, they can also be used for treating SIBO but it's definitely strain dependent which you will see in the studies I share later on. Although, at this stage the evidence on probiotics for SIBO is mixed and it’s best to take probiotics for treating SIBO only after consulting with your physician who can perform the right tests to figure out what's going on in your small intestine.

In 2017, a study published in the peer-reviewed European Review for Medical and Pharmacological Sciences was carried out by The Division of Gastroenterology at the Catholic University of the Sacred Heart.

Their clinical study wasn't on SIBO patients but involved 20 adult patients who had function constipation with high methane production because of intestinal methanogen.

They tested the Lactobacillus Reuteri (DSM 17938) probiotic strain in SIBO patients daily for 4 weeks at a CFU whilst performing regular H2/CH4 lactulose breath tests that were able to measure Hydrogen and Methane levels.

Whilst there were SIBO benefits noticed with increased bowel movements for the purpose of this SIBO blog post the CH4 (Methane) levels results were fascinating. It was found that this L. Reuteri strain was able to have a "significant decrease of CH4 production" all with no decrease H2 (hydrogen) production.

BioGaia Protectis was mentioned by Dr. Jason Hawrelak in his podcast episode as one of the best probiotics for SIBO. This is because it contains one single Lactobacillus Reuteri (DSM 17938) strain that has been studied for its use in the treatment of SIBO. The probiotic is 100 Million CFU per capsule and can be found at distributors like Amazon, Walmart, and iHerb for around $26.99. The probiotic has a 4.7 out of 5-star rating on Amazon from over 1000 real customer reviews.

This Randomized Controlled Trial from 2011 published in the peer-reviewed Scandinavian Journal of Gastroenterology was carried out by Accurate Clinical Research, in Houston Texas. The researchers tested 17.2 billion CFU of the B. Lactis HN019 probiotics on gut transit time.

100 participants either took 17.2 billion CFU, 1.8 Billion probiotics, or a placebo daily for 14 days and an X-ray on Whole gut transit time was done at day 0 and then day 14. Participants also reported their bowel habits before and after taking the probiotics.

The results of this study showed a statistical difference in the high and low-dose groups suggesting that the strain for SIBO was more important than the probiotics CFU count. The placebo group showed no improvements in SIBO and no adverse events were reported.

In her podcast with SIBO & Probiotics expert Dr. Haworenik, Phoebe Lapine mentioned that she had been using this probiotic strain with mixed results. Dr. Jason Hawrelak seemed to also echo her thoughts sharing that his patients either had amazing or simply no results with this probiotics strain.

ProbioMax was another probiotics supplement mentioned by SIBO expert Dr. Hawrelak in his podcast. It contains the clinically studied Bifidobacterium Lactis HN019 strain but also Lactobacillus Acidophilus La-14, Lactobacillus Plantarum LP-115, and Bifidobacterium Longum Bl-05 which have not been studied for SIBO. It also contains 100 Million CFU per capsule. ProbioMax claims to use gastro-resistant capsules that allow the probiotics to survive low pH and reach the small intestines.

This 2020 human clinical trial from Mexico published a paper in the Digestive Diseases and Sciences looking at the efficacy of Saccharomyces boulardii probiotic yeast taken alongside the Metronidazole antibiotic and also separately for SIBO.

The open pilot clinical trial had 40 participants who were diagnosed with both SIBO & Systemic Sclerosis and agreed to partake in the trial for 2-months. A hydrogen breath test was used to check efficacy against SIBO and so was a self-done questionnaire.

We do not know the probiotics CFU count of Saccharomyces boulardii taken but it was taken daily for 60 days. The results showed that SIBO was completely eradicated in the group who take the Saccharomyces along with Metronidazole versus only 25% in the Metronidazole alone group and 33% in the Boulardii alone group.

Proton Pump Inhibitors May Cause SIBO

A 2017 meta-analysis of 19 articles related to PPIs & SIBO published in the World Journal of Gastroenterology claimed that their findings showed that the use of Proton Pump Inhibitors could potentially predispose some people to small intestinal bacterial overgrowth.

From the 19 articles, over 7000 participants were studied and the results showed that "PPIs did moderately increase the risk of SIBO". This second study published one year later in 2018 in the Journal of Neurogastroenterology and Motility claimed that the reason for this was that the PPIs could suppress the gastric stomach acid barrier which in turn could alter intestinal bacterial microbiota.

Whilst this study made this claim, they also carried out a study on 128 children who had GERD and 120 healthy children in a control group. For 12 weeks two GERD groups took either a PPI with placebo or PPI with Lactobacillus reuteri DSM 17938 probiotics in liquid form orally 5 times per day at 10 million CFU per drop. The results showed children who took the probiotics & PPIs had a decreased rate of Dysbiosis which is an imbalance in gut bacteria.

56.2% went on to develop SIBO in the placebo group whereas only 6.2% developed SIBO in the probiotic group according to Glucose hydrogen breath tests. These findings are significant in that they once again give kudos to the Lactobacillus reuteri DSM 17938 probiotics strain in its potential role in dealing with SIBO.

Dr. Jason Hawrelak who spoke at the world SIBO summit in 2017 claimed in a podcast around the same time he was happy to use some Soil Based probiotics but that many of them had not been studied enough at the time of recording.

It seemed like some probiotic brands tried to make it sound like probiotic bacteria that came from the ground had some unique powers when in reality it was just the same as any other type of probiotic bacteria like Lactobacillus, Bifidobacterium. The one "superpower" they do have however is that is quite resilient.

This 2019 article showed that the soil-based spore-forming Bacillus Coagulans probiotics had some interesting properties against fighting pathogenic bacteria, immune system function, and helping with digestion through enzyme secretion which could be helpful for the small intestine.

Without Prebiotic fiber, the probiotic microorganisms would not be able to survive eventually starving out and dying off. A 2010 randomized clinical controlled trial published in the Alimentary Pharmacology & Therapeutics peer-reviewed journal found that rifaximin with partially hydrolyzed guar gum could be effective for Small Intestinal Bacterial Overgrowth versus just rifaximin alone.

The study tested the PHGG prebiotic fiber and antibiotics on 77 patients who had a positive glucose breath test confirming SIBO and the study confirmed that taking both together was more effective in "eradicating SIBO" according to the conclusion. PHGG has also been shown to be beneficial in a meta-analysis of IBS studies helping with diarrhea, constipation, bloating, and more. It's thought to help produce the short-chain fatty acid butyrate.

Not every probiotic strain has been studied for SIBO so it's unclear if something like Lactobacillus Reuteri (DSM 17938) is the best or just one of the few that has actually been studied.

It's quite clear from studies that probiotics can help with SIBO but often as an adjuvant treatment occasionally with Antibiotics. Certain Lactobacillus & Bifidobacteria strains could make some SIBO symptoms worse depending on the severity of their case.

More studies on probiotics for SIBO are needed to get a clearer picture of it's use as a treatment. If you are going to use probiotic supplements then do it under the supervision of a Doctor and start slowly.