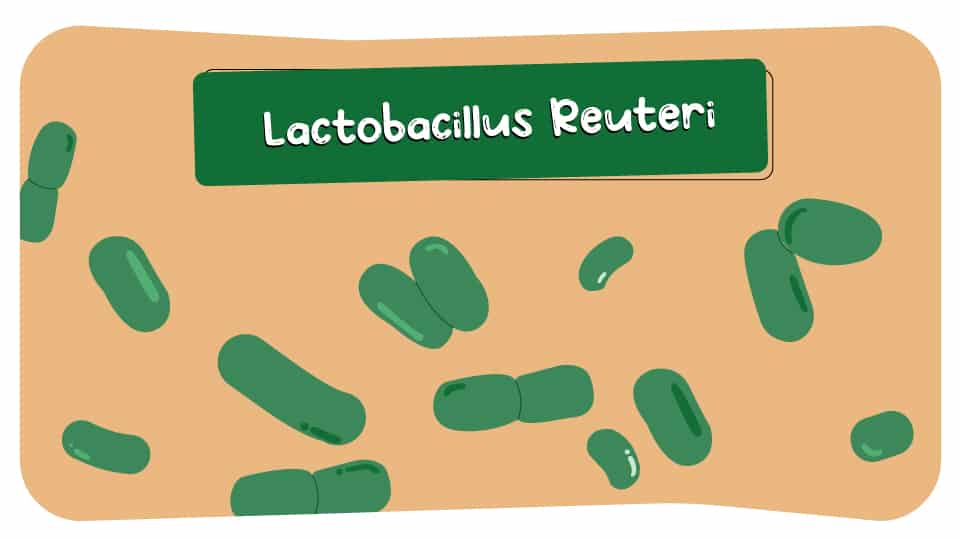 Lactobacillus Reuteri is a gram positive bacili shaped probiotic strain that can be found in the gastrointestinal tract, urinary tract, skin and even in breast milk. It is non-spore forming.

Lactobacillus Reuteri is able to survive in low-pH and enzyme rich environments ensuring the strain has a higher chance of multiplying and reaching deep enough into the intestines.

L. Reuteri was originally thought to be Lactobacillus Fermentum until a man by the name of Gerhard Reuter discovered and named the strain after himself.

There are only a handful of good quality studies for Diverticulitis out there at the time of writing this in November 2022 but interestingly however one of the best was Lactobacillus Reuteri from meta-analysis I conducted.

This study tested Lactobacillus Reuteri ATCC PTA 4659's effects on 88 male and female patients who were diagnosed with Acute Uncomplicated Diverticulitis. The study was a double-blind placebo-controlled study published in 2019 through the International Journal of Colorectal Disease.

The study was carried out well and it was easy enough to see if the L. Reuteri strain worked or not. Compared to the placebo group taking the antibiotics with L. Reuteri significantly reduced abdominal pain and inflammatory markers. The L. Reuteri group also required shorter hospitalization.

The reason L. Reuteri seemed to have helped was because of the anti-inflammatory C-Reactive Protein effect which is common and documented with some other Lactobacillus probiotic strains.

The Lactobacillus Reuteri ATCC 6475 probiotic strain in this 2013 study was used on mice during separate gastrointestinal studies but amazingly the scientists discovered that mice taking the probiotic strain exhibited more lustrous fur compared to other mice they had seen.

Initially, they planned to feed a group of mice L. Reuteri starting at 20 - 24 weeks of age and then planned to check fur luster, pH readings, and histology. Scientists were surprised when after just 7-days of eating the yogurt, the control group of mice had differences in fur luster.

Mice that ate just a normal bland diet were said to have dull fur luster and even so alopecia along with dermatitis. The fur benefits were more pronounced in female mice and they had more acidic pH.

It is thought that the reason for the hair benefits was because of the L. Reuteri probiotic strain blocking High IL-17 inflammation. Other Lactobacillus bacteria like L. Salivarius have also been shown to have anti-inflammatory effects. Unfortunately, this same study has not been clinically carried out on humans yet.

The use of probiotic supplementation to boost testosterone isn't that common and there have not been many studies testing if probiotic bacteria can help.

The reason for conducting the study I am going to review was brought about by chance. In previous studies, mice were noted to have unusually large testes and social dominance behaviors after being fed probiotic yogurts and pure lactic acid bacteria.

This led to a study being published in 2014 in Massachusetts, United States of America. It looked at if supplementation of L. Reuteri in mice could increase testosterone and the results were interesting.

The study is long and there is a lot of information in it further on in the study it stated that "L. reuteri may provide an alternative natural approach to the prevention of late-onset male hypogonadism (low-libido)" meaning that potentially there could still be testosterone benefits taking L. Reuteri at any age but keep in mind this study was carried out on mice and not clinically on humans.

The use of Lactobacillus Reuteri for IBS and IBD has been contested in the past. One randomized placebo-controlled trial from 2005, took 54 participants with IBS to test Lactobacillus Reuteri ATCC 55730 in a 6-month double-blind placebo study. Unfortunately only 39 ended up completing the study and the results showed no difference between the placebo and L. Reuteri groups for improvements with IBS and IBD.

Another more complex study from 2014 published in the Scandinavian Journal of Gastroenterology found that Lactobacillus reuteri RC-14 along with Lactobacillus rhamnosus GR-1 was able to increase T-Cells and decrease inflammation in patients who had Inflammatory Bowel Disease. The scientists had a theory that L. Reuteri may have helped convert sugar to tryptophan which may have helped with serotonin production in the gut.

This 2012 study conducted on humans was a nice and simple double-blind placebo study with 114 hypercholesterolaemic participants. Half of the group was randomly given yogurt containing 5 Billion CFU of Lactobacillus Reuteri NCIMB 30242 probiotic bacteria or a placebo that tasted the same.

Half of the subjects were told to eat the yogurt twice per day for a total of 6-weeks while another half ate the yogurt without the L. Reuteri probiotic strain or any other probiotic bacteria.

At the end of the 6 weeks, those who had unwittingly ingested the L. Reuteri yogurt had lower LDL-cholesterol, Total Cholesterol, and non-HDL-cholesterol. The Lactobacillus Reuteri was microencapsulated which made sure it passed through the digestive tract.

This clinical trial published in The Journal of Allergy and Clinical Immunology took children aged 1 to 13 years old suffering from Atopic Dermatitis and had them take probiotics for 6 weeks in hopes that it would help.

The two strains chosen to give to the children were Freeze Dried Lactobacillus rhamnosus 19070-2 and Lactobacillus reuteri DSM 122460 at 1 Billion CFU each. They were freeze-dried to ensure the maximum potency of the bacteria. Markers related to pro-inflammatory cytokines were recorded and so was the atopic dermatitis scoring system. Eosinophil cationic protein in serum & cytokine production by PBMCs were the inflammatory markers measured.

The study was a double-blind placebo-controlled study so some of the kids were given the L. Reuteri / L. Rhamnosus bacteria strains and others were given a placebo.

After 6 weeks 56% of those given the probiotic bacteria had improvements with their Eczema vs just 15% in the placebo group. The kids in this study who had eczema from allergies (confirmed by skin prick test) experienced more pronounced improvements according to the conclusion.

This excellent human 2015 pilot study from Berlin Germany showed a reduction in the overgrowth of H. Pylori using the Lactobacillus reuteri DSM17648 probiotic strain. 700 other strains were tested but Lactobacillus Reuteri DSM21031 was one of only three able to co-aggregate with the spiral forms of H. Pylori.

Further reviews like this one from 2018 also strengthened the evidence that L. Reuteri may help decrease the symptoms of H. Pylori infection and the bacterial load. It's thought this was possible because the L. Reuteri probiotic bacteria was able to compete and win against the H. Pylori bacteria.

Vitamin D is important for a whole range of different things and L. Reuteri NCIMB 30242 was tested to check if taking it orally would be able to increase 25-hydroxy vitamin D in the human body.

The study concluded that L. Reuteri NCIMB 30242 did seem to increase 25-hydroxyvitamin D by 25.5%. That may sound impressive but the placebo group also increased by 22.4%.

This 2019 study simulated Vulvovaginal Candidiasis in an a vitro model. The epithelial cell line (VK2/E6E7) was purposely infected with C. Albicans 3153a to start the experiment.

The scientists then used a combination of L. rhamnosus GR-1 and L. reuteri RC-14 either combined, mixed or alone. The amount of yeast and cytokine levels were measured at various intervals to check if the probiotic bacteria was killing off the yeast.

It was noted that both L. Rhamnosus and L. Reuteri together were able to decrease the yeast population and the cell-based test concluded that both strains may inhibit yeast growth but human studies are needed to further confirm efficacy.

Gabriela Sinkiewicz from the Department of Biomedical Laboratory Science, Health and Society, Malmö University, Malmö, Sweden has studied Lactobacillus Reuteri in the past quite extensively according to this article from Science Daily.

In one of her studies, Gabriela noted that L. Reuteri Plaque and Bleeding from the gums declined after only 2-weeks of L. Reuteri usage but not much more information was available.

Other Lactobacillus bacteria have been studied for dental health and some positive results have been shown for things like periodontitis. More human studies are needed for L. Reuteri to figure out if the strain can be truly beneficial for L. Reuteri.

This 2018 study claimed that while the effects of Lactobacillus Reuteri are still not fully clear the mucosal barrier is important for protection against leaky gut syndrome. They claimed the L. Reteuri strain may have benefits via a protective effect on bacteria-induced leaky gut.

Enterotoxigenic Escherichia coli (ETEC) bacteria is thought to be one common cause of intestinal permeability that leads to leaky gut and it was hypothesized that the L. Reteuri strain could protect the mucosal barrier from this strain.

L. reuteri DSM 17938 was used in a vitro setting and not tested in humans with leaky gut. The study concluded that the probiotic strain was able to decrease intestinal permeability and slow down damage to the intestinal barrier from the ETEC bacteria.

No clinical human studies are showing the long-term effects of supplementation of Lactobacillus Reuteri probiotic bacteria.

Some studies showed people gained weight after taking L. Reuteri in studies so weight gain could be another side effect. There are far better strains for weight loss and L. Gasseri is one of them.

In all of the studies in this blog post, there were no serious side effects reported and some studies even claimed that Lactobacillus Reuteri was safe for consumption.

As always, if you experience any side effects, discontinue the use of your probiotic supplement and consult with a Doctor. I am not a Doctor and this content is not medical advice.

Lactobacillus bacteria can be found in a variety of fermented and dairy foods. Lactobacillus Reuteri may be found in the following foods but you cannot always guarantee the specific strains or CFU count.

If you want to know the specific Colony Forming Units of Lactobacillus Reuteri and be sure that you 100% ingest the L. Reuteri strain then probiotic supplementation may be the best thing to do if you want the same strains that have already been tested in humans.

Lactobacillus Reuteri has to be one of the most studied probiotic strains out there in 2022. It's quite rare to even though the origins of who discovered a bacteria strain.

All credit goes to Gerhard Reuter and it's a shame that there isn't more information out there on him. It's undeniable that there are some health benefits from Lactobacillus Reuteri and that it's safe enough to use in supplements.

L. Reuteri should never be used as a replacement for any prescribed medication. Many studies used the strain alongside other medications and the human participants were always monitored by Doctors.