If you take a look at the instruction label on many medications they will explicitly mention to not drink alcohol with the medication.

Some of the most notable medications not take alcohol with include painkillers, sleeping tablets, anti anxiety pills, anti depressants, antibiotics and more.

Researching the relationship between alcohol and probiotic food supplements is a wise thing to do.

In this guide, I will explain alcohol's effect on probiotic bacteria with gut health and let you know if you can take both together.

Can You Drink Alcohol And Probiotics Together? 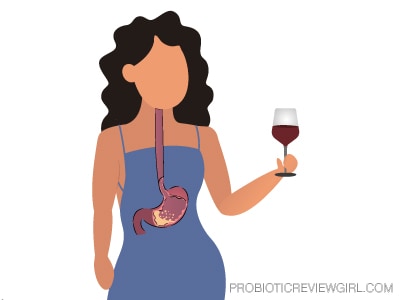 Alcohol is a powerful germicide which means it can kill certain types of bacteria, viruses and fungi. This is why alcohol dispensers were so popular recently.

When ingesting probiotic supplements they will travel through the digestive system and follow the same path as alcohol. Taking them together means they will be in direct contact at some point.

Studies have shown that alcohol like whiskey can kill bad bacteria and we can assume that the same could potentially be said for friendly probiotic bacteria. Alcohol may be able to kill Salmonella and E. Coli that come from food poisoning but some bacteria are becoming resistant to alcohol.

Studies on what happens when probiotic bacteria come into contact with alcohol in the stomach and intestines are non existent. Polyphenol in red wine was even shown to have a protective effective effect on gut bacteria in moderation according to Kings College London.

While you can drink both alcohol and probiotics together, it's a bad idea and not advised. There is a chance that doing this will reduce the efficacy of your probiotic supplement by killing the probiotic bacteria before it reaches your intestines.

How Long After Drinking Alcohol Can You Take Probiotics? 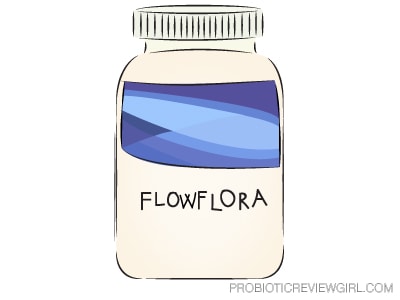 In my when to take probiotics guide I concluded that taking probiotics on an empty stomach would give your digestive system the best chance of keeping the probiotic bacteria alive long enough to reach your intestines.

If you are drinking alcohol you should wait 3-4 hours after your last drink before taking probiotics. This will give your body the chance to let the alcohol pass through your digestive tract. The probiotic bacteria and alcohol won't come into direct contact.

Wait 3 to 4 hours After Drinking Alcohol Before You Take Probiotics.

If you have drunk alcohol the previous night and wake up the next morning taking a probiotic supplement is fine and highly recommended. It may help to replenish the damaged gut flora and assist with any gut inflammation that the previous nights drinking has caused but only as part of a long term strategy.

Scientists in Russia claimed that using probiotics could possibly help as part of a hangover recovery plan. Not much was known about the trustworthiness of this Russian study and more research is needed to know if Probiotics can help everyone with their hangovers. It's well known that most Probiotics take time to work and are not a quick fix.

Companies like YCombinator backed Zbiotics, created a drink with the B. subtilis ZB183™ Probiotic strain that claims to help your body produce the same enzyme your liver produces to help digest acetaldehyde in the gut. This is a toxin they claim is the main culprit for hangovers.

Does Alcohol Kill Probiotics In Kombucha?

Kombucha without alcohol is already not a good probiotic in my opinion and is quite over rated as a probiotic. It contains no Lactobacillus, Bacillus or Bifido bacteria that have all been well studied and instead contains a lot of unknown strains at a low CFU count.

When you add alcohol into the equation then Kombucha becomes even more useless as a source of probiotics. Bacteria strains like Gluconacetobacter inside Kombucha most likely will not survive and the alcohol will kill the probiotics in Kombucha even before it reaches your stomach.

This meta-analysis stated that alcoholism has been associated with gut microbiome dysbiosis which brings up a whole of range potential side effects. Gut Dysbiosis has been shown to lead to the following symptoms in some people.

Dysbiosis is essentially an imbalance between good and bacteria in the microbiome and this can happen when alcohol causes damage in the gut through inflammation that leads to good bacteria being killed making it easier for bad bacteria to then grow.

Furthermore, inflammation in the gut may lead to the gut barrier breaking over time which is known as 'Leaky Gut Syndrome'. This is particularly bad because harmful substances like gluten, bad bacteria and other chemicals can then enter into the blood stream through holes in the gut lining.

Another 2015 study also stated that alcohol could lead to qualitative dysbiotic changes, inflammation and interestingly stated that using probiotics as an intervention should be considered as a treatment but they also stated that data in humans was currently limited.

According to Healthline researchers concluded that those who drank red wine in moderation it in moderation had better gut health and better levels of gut bacteria but drinking it moderation was key and that other types of alcohol didn't have the same benefits.

This 2014 study from Madrid, Spain claimed that they were able to isolate lactic-acid bacteria from red wine. Also, polyphenols found in red wine may be able to boost gut bacteria in the gut flora by working as a prebiotic.

The long-term effects of drinking too much wine may lead to diarrhea, liver problems heart problems, acid reflux, and other serious side effects. If you want to boost your gut health eating fermented probiotic foods like Kimchi, Sauerkraut & Kefir is a safer option.

There seems to be scientific evidence that excessive alcohol consumption can disrupt the bacteria in the microbiome, cause inflammation and potentially damage the stomach lining. Some studies have shown that probiotics may restore bowel flora and help alcohol induced liver injury via the gut & liver axis.

Drinking alcohol at the same time as taking your probiotic supplement could also kill some good probiotic bacteria strains. More studies are needed on if probiotic bacteria can help with alcohol related gut damage by replenishing gut bacteria and lowering inflammation. If you enjoyed this blog post, you will love this does beer have probiotics article I wrote.