Is Kombucha A Good Probiotic?

In this brutally honest guide I am going to be sharing why I don't think Kombucha is a great probiotic.

I will also share some other probiotic facts related to the Kombucha drink and how to stay safe when drinking Kombucha.

I will also let you know what probiotic & yeast strains can be found.

Kombucha is unique in that it has probiotic bacteria and also probiotic yeast strains that aren't usually found in probiotic supplements.

The strains and yeasts found in Kombucha depend on the starter culture and SCOBY used but most typically Kombucha will contain the following bacteria and yeast strains but this is not a definitive list.

In this study, it states that different temperatures during fermentation result in distinctive strains. Kombucha contains a lot of Acetobacteraceae which is an acetic acid bacteria.

According to another study, Gluconacetobacter was isolated from a Kombucha tea drink. Gluconacetobacter is a type of Proteobacteria. There aren't many studies behind these strains because of how unique they are so not much is known about the benefits and side effects.

Saccharomycodes ludwigii is a yeast that is often used to brew beer and also wine because it is able to ferment glucose, sucrose and other fructose sugars. More studies are needed on the benefits of these yeast strains and any health claims should be taken with a pinch of salt.

Is Kombucha a Probiotic Or Prebiotic? 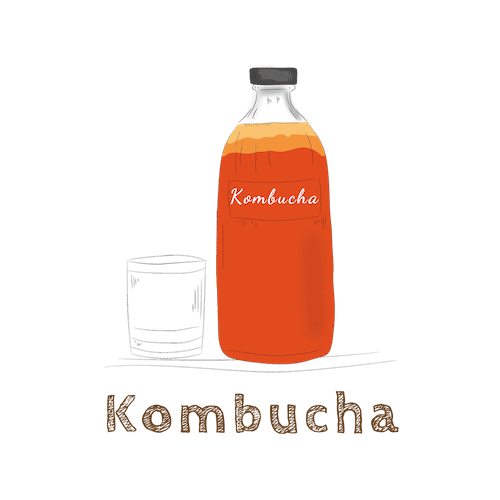 Prebiotics are fibers that your body doesn't digest and while this may sound like a bad thing it is not. Because these tiny fibers don't digest they sit in the lower part of your digestive tract and act as food for the probiotic bacteria in your gut. If your probiotic food doesn't get these fibers they may starve and die off.

What Kombucha Brand Has The Most Probiotic's?

If you want to know what Kombucha brand has the most probiotics then you should check the CFU count. This stands for colony forming units and should give you a rough idea of how strong your kombucha probiotic drink is.

Every Kombucha brand I researched did not list the CFU count. Some brands like Kevita & Livesoda claim their drinks contain a 2-billion CFU count which on the surface sounded impressive but their drinks technically are not Kombucha. They are probiotic tea shots that contain Lactobacillus and Bacillus bacteria.

It's not possible to know what Kombucha brand has the most probiotics if this data isn't shared publicly. If you want to drink a Kombucha brand with a lot of probiotics then try drink something from a local seller that has made it fresh or make your own.

Is Kombucha A Good Probiotic?

If I have to be totally honest based on the research I have conducted I would have to say that as a probiotic, Kombucha is not a good probiotic.

The CFU count's are not known and there is a serious lack of studies that back up any health benefits from the strains that aren't even always guaranteed in each Kombucha drink. If you disagree with me please leave a comment below.

Kombucha can be gluten-free, vegan, and keto-friendly all at the same time. But it all depends on the ingredients used. This beverage is made from non-dairy ingredients such as tea leaves and sugar—thus, it is both gluten-free and definitely vegan. However, answering the question if this beverage is ketogenic friendly would be a little complicated. It is both a yes and a no, depending on how the kombucha is made.

I already mentioned that kombucha is a fermented sweetened tea, thus it is made with loads of sugar. But don’t worry. These sugars will be eaten by the culture to facilitate fermentation. After fermentation, only a little sugar will be left making the kombucha low-carb.

But since the taste of kombucha is a little like vinegar some commercial brands choose to add more sugar and fruit flavors. This time, the end product is not keto-friendly because these versions of kombucha are loaded with carbs and sugars that will definitely kick you out of ketosis.

Drinking kombucha is generally pretty safe when following all the best standards but when made under conditions where it can be contaminated with bad bacteria from containers or an unclean home setting, it can become unsafe to consume.

The safest way to drink Kombucha is to buy it from a brand that is USDA Organic, NON GMO Project verified and you can always ask the brand if their Kombucha is made in a factory that follows Current Good Manufacturing Practice.

If you experience any side effects after drinking Kombucha you should stop drinking it and consult with your Doctor as soon as possible. I am not a doctor.

Kombucha has been talked about countless times on reddit and some of the replies provide some great insights into whether or not Kombucha is as healthy as it is made out to be. I will share some of my favorites.

In the official Kombucha subreddit Brandon_Me started a thread asking if this stuff was actually good for people. Walker6168 said it helps them induce a solid bowel movement every time they drink it.

KanariaRose replied saying there was a lot of PsuedoScience around Kombucha and that the studies conducted contained small sample sizes so the health benefits couldn't be trused. They finished off by saying they like to drink Kombucha after they have had a round of antibiotics.

In this thread a user called SterlingPhoenix said that like probiotics in yogurt, kombucha was also good for gut health. They said it was not magic. YunnoYork replied that people who already have a diverse gut flora with no digestive problems probably won't notice any benefits.

Kombucha is a good probiotic drink that can give you a wide range of health benefits provided it’s drunk in moderation and you take precautions when making it homemade. These benefits may not come from the probiotic bacteria though.

Another Probiotic drink worth trying if you are not vegan, try Kefir which has multiple different Lactobacillus Probiotic strains and has a far higher CFU count that Kombucha drinks. The CFU counts are usually listed as well from some brands like LifeWay Probiotics (15-20 Billion) so you know you are getting some potent probiotics.

Drinking kombucha from brands at your local store or online from a genuine company is the best option if you want to stay safe from any harmful effects from bad bacteria that may come from making Kombucha by yourself.