Does Beer Have Lactobacillus Probiotic Bacteria?

One of the best ways to get a diverse range of probiotic bacteria is through eating fermented foods like Kimchi, Sauerkraut, and Yogurts and from probiotic drinks like Kefir milk.

So does this mean that all beers have gut-friendly Lactobacillus strains or probiotic yeast like Saccharomyces that have been studied for conditions like Irritable Bowel Syndrome?

Does All Beer Contain Probiotic Bacteria? 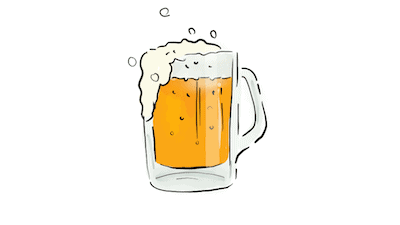 The hop iso-α-acid hops in most beers don't come from yeast and may kill off the gut-friendly bacteria strains before any liquid even touches your lips. In recent years, however, people like Professor Eric Claassen from Amsterdam University have shown that strong beers fermented twice may have yeast probiotics.

It's similar to how probiotic drinks like kefir and kombucha are made but for the most part, the amazing Lactobacillus bacteria isn't mostly used to ferment beer. Instead, it is a yeast that is used most commonly in Belgian beers. If you are experienced in home brewing beer then you could in theory use any probiotic strain.

So in short, stronger and darker beers that have fermented twice are more likely to contain probiotic strains that are good for the gut. Sour Beers and Belgian lambics have some of the most potent probiotic yeast that survives the fermentation process.

In 2019, the results of an experiment fermenting beer with gram-positive Lactobacillus probiotic bacteria were published in the peer-reviewedFood Microbiology Journal. The experiment was conducted by Mei Zhi Alcine Chan, Jian Yong Chua, Mingzhan Toh, and Shao-Quan Liu from the National University of Singapore.

They claimed that as a result of hop iso-α-acids lactic-acid beer was not able to survive the fermentation of beer and as a result was killed off. They experimented with the survival of Lactobacillus Paracasei L26 fermented along with Saccharomyces cerevisiae S-04 during a 10-day fermentation using an unhopped wart.

During the initial 10 fermentation, the L. Paracasei CFU was shown to survive. At the end of wort boiling Isomerized hop extract containing was added as late hop addition and amazingly the L. Paracasei CFU count with S. cerevisiae S-04, at this point was even enhanced during refrigeration. Adding in the hops later and co-fermenting Saccharomyces appeared to allow the beer to have living gut-friendly lactobacillus paracasei probiotics.

Beer should always be drunk in moderation regardless of whether they contain probiotic yeast or bacteria. Most beer will kill probiotic Lactobacillus bacteria during fermentation unless the hops are added in later on with S. Cerevisiae S-04 during a second fermentation.

If you want to get a beer with beneficial brewer's yeast look for darker strong Belgian beers. In theory, you could also use your own Lactobacillus Bacteria for gut health with homebrew beers following the guidance from the Singaporean study. The content in this guide is not medical advice and I am not a Doctor.