Solimo is a probiotic developed and marketed by Amazon. Amazon decided to create its own line of probiotics and branded it as “Solimo.”

Many people have long speculated that Amazon used sales data from the Amazon FBA sellers on their platform to develop similar products, and this was covered extensively by WSJ here.

It is apparent at first glance that using the sales data of sellers on the Amazon site to create competing brands may seem a little bit shady.

Nonetheless, my goal is to give an unbiased review on whether the Solimo probiotic & Immune Support created by Amazon is legit or not.

So, let us see how Solimo Probiotic compares with other similar probiotics brands like Olly, for example.

What is in the Solimo Probiotic Line?

Solimo is a private label brand owned by Amazon, which includes a lot of products, including probiotics. Amazon gets these manufactured by other manufacturers, mostly based in Asia on contract, and sells the products under the Solimo brand through its site across several countries.

Although the company claims that the products sold by them under the Solimo brand are chosen randomly, research shows that this is far from the truth. In most cases, these products are copies of other successful products sold on Amazon’s site by other companies.

Amazon sells a wide range of probiotics under it is Solimo brand, including their probiotic gummies with 2 billion CFU and their probiotic capsules, which have 5 billion and 10 billion CFUs. Prebiotics, Immune Support and a Probiotic Blend of Lactobacillus Rhamnosus.

Amazon also has another private label brand named Revly, which mainly includes its more potent probiotics with 50 billion CFUs and offers custom made probiotic capsules for women. At the time of writing, I have not reviewed those yet. 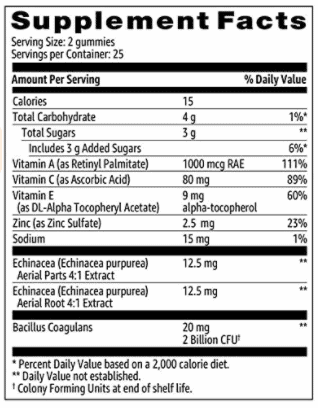 I decided to personally try the raspberry Solimo Prebiotic/Probiotic gummies after coming across them a few months ago.

These are vegetarian and gluten-free and can be taken by most of the people.

A serving of 2 gummies contains 2 billion CFUs or colony-forming units of the Bacillus Coagulans strain.

The gummies felt to be of low quality, were quite sugary, and extremely sticky.

I thought that these gummies are a bit different from others and tried to continue taking them for few days, but I was done after a couple of days and ended up returning the product as it did not meet my expectations.

Side effects with probiotics are quite common, but what I experienced with Solimo prebiotic/probiotic was unimaginable as instead of making my condition better, these gummies worsened them dramatically.

I have managed to reduce the gas and bloating from which I suffered with the help of other probiotics. My bloating and gas returned, and I also felt some pain in the stomach within the first 24 hours of taking these gummies.

Things worsened further when I decided to take another dose on the 2nd day as I initially thought that these side effects would go away soon. So, in the end, I could not take these gummies for more than 2 days and had to return the product on 3rd day itself. My stomach felt much better once I stopped these gummies, and I slowly recovered in the next few weeks.

It seems that mine is not the only negative experience as Dyson808 says in his review that these caused him diarrhea. In contrast, another user Ladygreen says that she suffered from stomach issues immediately after taking these gummies.

Katie has left a review complaining about the lousy texture and taste of these gummies.

Several users have complained that these are quite sticky like jelly and should not be called gummies as they are way hard to be classified as gummies. Many users also did not like the taste and the texture of these gummies.

Ryan Nakamoto writes that he had to deal with an enormous quantity of gas after taking these gummies, and he will never again buy these.

You can read a full list of potential side effects on Healthline.

I ended up returning the Solimo gummies to Amazon and got my refund a few days later. These gummies were so sticky that I had trouble removing them from my teeth and did not work for me. Indeed, they worsened the condition of my stomach, and I fully recovered only after several days.

In addition to these gummies being ineffective, they also pose a moral dilemma for any buyer as the same money you can spend on buying probiotic gummies from smaller companies who do not have multibillion-dollar resources of Amazon.

I would not recommend these gummies to anyone due to the severe side effects experienced by me. I would support other independent sellers who have expertise in manufacturing and selling probiotic products.