According to DIPUTI, it's claimed that over 50% of women will experience at least one UTI in their lifetime, and is commonly caused by Escherichia Coli bacteria.

It's thought to be more common in women for a number of different factors like the following.

There have been plenty of high-quality human studies carried out in people with UTIs and in this blog post, I will be sharing some of those with you to answer the question of if probiotics can help with UTIs or not.

Table Of Contents
Probiotics For UTI Studies
Best Probiotic Brand For UTI
What Is UTI?
Other Tips For UTI
Can Probiotics Cause UTI?
Closing Thoughts 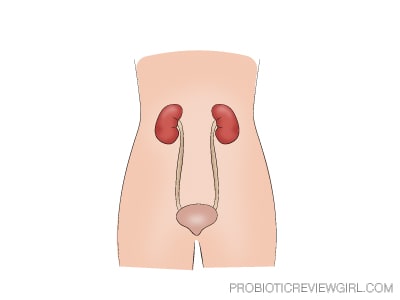 The Urethra Connects To The Kidneys.

One of the best ways to figure out what probiotics work for UTI infections is to look up medical studies that include human participants with UTIs.

The quality of Probiotic studies for this condition isn't great with more resources going towards similar conditions like Bacteria Vaginosis & Candida.

High-quality reviews like this one show that there is a Urinary Microbiome that may "protect" the urinary tract from infection.

Probiotic bacteria like Lactobacillus, Actinomyces, and Streptococcus may have a role in strengthening the urinary microbiome.

These friendly bacteria can make it a hostile environment for bacteria like E. Coli to survive and the bacteria in the gut microbiome has a role in overall immunity.

These 6 studies do however give some insight into the effects that probiotic bacteria have on people with recurrent UTIs and show if oral or suppository use is more beneficial.

This 2018 review from Universities in The United Kingdom, Singapore, and Thailand looked at 9 Clinical Trials that included 726 patients with UTIs.

The purpose of the review was to figure out if Lactobacillus probiotic bacteria could be beneficial in preventing recurring UTI infections in females either through oral or suppository means.

The conclusion from this review was that current data showed probiotics do support a preventative effect and that the most studied strain was Lactobacillus Rhamnosus GR1 and Lactobacillus Reuteri RC14.

This review was pretty poor though and didn't give any further information on dosages, efficacy, or other potential probiotic strains.

The Department of Microbiology and Immunology, carried out a clinical trial back in 1992 to test if probiotics could help with the recurrence rate of UTIs after antibiotic treatment.

41 women with acute lower UTIs were recruited for this trial and were split to either receive Norfloxacin alone or trimethoprim with sulfamethoxazole for a total of 3-days.

Not surprisingly, both treatments worked well in eradicating the UTI initially but 29% of the ladies in the Norfloxacin group had their UTI come back, and 41% in the second group.

To test if probiotics could help reduce the recurrence rate, Lactobacillus probiotic suppositories were given and the conclusion was that they were both safe and effective in "reducing the recurrence of UTI" following antibiotic treatment.

Since 1992, further studies have shown that probiotics taken orally may work better than if taken as a suppository since the probiotic bacteria has a chance to first grow in your microbiome and then make its way to the vagina.

If this trial was to be repeated in 2022, it would be better to see it done orally and for the Lactobacillus probiotic bacteria strains to be disclosed.

This next study published in the summer of 2004 by the Canadian Research and Development Centre for Probiotics, didn't look at UTIs but instead the recurrence of Bacteria Vaginosis after antibiotic treatment.

This study is interesting because it adds credence to the debate between suppositories and oral probiotics.

There are some similarities between UTI and BV in that they are both treated by antibiotics and this study claimed that with BV there is an imbalance of Lactobacillus bacteria in the vagina with an increase in bad bacteria like Escherichia coli, Streptococcus agalactiae, and Staphylococcus aureus.

Often those with a UTI may be affected when bacteria from a vaginal flora imbalance reaches the urethra.

In the previous UTI study, it was suggested that taking Probiotics via suppository could potentially help restore this imbalance.

In this 2004 a randomized placebo-controlled clinical trial showed that taking Lactobacillus Rhamnosus GR-1 and Lactobacillus Fermentum RC-14 probiotic bacteria every day for 2-months restored this imbalance in the vagina and it's thought these two Lactobacillus strains worked well.

This Finnish study was published in the peer-reviewed, The American Journal of Clinical Nutrition and looked at if dietary foods that included fermented kefir milk could help protect women from Urinary Tract Infections.

139 women in Finland diagnosed with acute UTI were compared to 185 women of a similar age but with no UTI history and their current dietary habits were recorded.

It's thought that those who were reported to have drunk fermented milk at least 3 times per week were found to have a "decreased risk of recurrence of UTI" and it's thought that dietary factors could play a part in the prevention of UTIs.

Kefir milk is known to have a diverse range of Lactobacillus and Bifidobacterium probiotic strains. It was also found that active sexual intercourse was grounds for risk of UTI but their intercourse partners fermented milk drinking habits were not shared.

In 2011, The Department of Medicine, University of Washington, Seattle, published the results of their randomized placebo-controlled clinical trial looking at the effects of giving Lactobacillus Crispatus via intravaginal suppository to females with recurrent UTIs.

For this trial, 100 women with a history of recurrent UTIs were recruited to either receive a suppository containing Lactobacillus Crispatus or a fake placebo once per day for the first 5-days and then once per week for 10 weeks.

After this, the women had urine samples were taken and vaginal swabs for real-time quantitative 16S ribosomal RNA gene polymerase chain reaction.

The results of the trial showed that 15% of women taking the L. Crispatus bacteria had a recurring UTI vs 27% in the placebo group.

These numbers aren't great and this may further strengthen the theory that taking a multi-strain high CFU (colony forming units) probiotic orally is a better solution for UTI prevention. This trial did however show that Lactobacillus Crispatus did have some positive effects.

This final comparative study from way back in 1985 looked at the effects of Bacillus Subtilis in 95 women with infection calculosis from recurrent urinary tract infections.

Because of how old this study is there isn't much information on dosages or administration methods of the probiotic bacteria.

It was however found that the B. Subtilis bacteria along with antibiotics had an "immunomodulatory" and "stabilizing" effect on intestinal flora that helped possibly lower Urinary pH levels versus a placebo.

From my hours of research I have concluded that based on customer reviews and my own experience, Women's Health Balance from Cultrurelle is the best probiotic brand for women looking to prevent UTIs from recurring & occurring but not as a treatment.

Culturelle created a probiotic supplement that features many of the strains I shared in the six previous.

One box on the Culturelle website is listed at $29.99 for 30-capsules which lasts one month.

It has a 15-billion CFU count and claims to support pH balance and restore important bacteria in the microbiome.

It is suggested to take 1 capsule per day before meals with water but I also suggest using some kefir milk instead of water.

Women's Health Balance is NON-GMO, dairy-free, gluten-free, vegan, and has plenty of 5-star reviews. It doesn't need to be refrigerated provided you keep it out of direct sunlight.

UTI stands for Urinary Tract Infection and can effect a person's bladder, urethra, kidneys, and even spread to a person's blood.

They can be diagnosed through Urine tests and most typically antibiotics are prescribed to treat an infection.

It is, however, possible for men to also get UTIs but the cause differ greatly and it's claimed that after the age of 50, men have a much higher chance of getting a UTI because of things like decreased mobility.

Whilst the cause of UTIs in women/men differ, the painful symptoms of a UTI are quite similar and they can include the following.

Because of the seriousness, a potential UTI infection can cause it's absolutely imperative that you visit your doctor ASAP for evaluation and treatment.

There are said to be at least 13,000 deaths per year in the USA alone from UTI and this increases when the UTI infection spreads to your blood. I am not a Doctor and this guide is not medical advice.

Other Tips For UTI

It's often claimed that preventative measures are the best solution for an illness and dietary factors may help to strengthen your body's response to a potential UTI infection.

You can improve your gut health by getting collagen from bone broth, getting plenty of prebiotic fiber from dark leafy vegetables or chicory root fiber, and probiotic bacteria from fermented dishes like kimchi, sauerkraut, and kefir milk.

A recent Pubmed published review in 2020 found that D-Mannose supplements could be used as an "alternate treatment" for recurrent urinary tract infections because of it's the ability to inhibit bacterial adhesion to the urothelium in urine. Cranberries are an excellent natural source of D-Mannose.

Some good old Vitamin D was also shown in a 2016 clinical trial involving 511 participants to possibly prevent UTI infections because of unknown reasons and further studies were needed to explore the role Vitamin D plays.

Can Probiotics Cause UTI?

In the previous 6 studies shared, there were no reported cases of probiotics causing UTI's so based on that, probiotics can't cause UTIs.

Probiotics contain good bacteria and not any of the bad bacteria found in samples from UTI infections.

If you are worried about probiotics causing a UTI infection you should consult with a medical professional for qualified medical advice. I am not a Doctor.

It's clear from my research, that the bacteria in your microbiome do have an impact on UTIs with different Lactobacillus strains having various effects on the bacteria from a UTI.

The main issue that occurs after this stage is that antibiotics are awesome at wiping out the probiotic bacteria in your microbiome.

Studies have shown that probiotics can help prevent recurring UTI infections by making sure the microbiome has the right probiotic bacteria to crowd out the bad bacteria.

Probiotics cannot cure UTI infections but they may be able to prevent them and assist in recurrent UTIs especially after antibiotic usage according to studies I shared in this guide.

This guide is not medical advice and if you have any symptoms of a UTI you should visit a medical professional immediately. Probiotics should not be used as a replacement for any prescribed treatment.