TruBiotics Review – Will you have (Side Effects)? 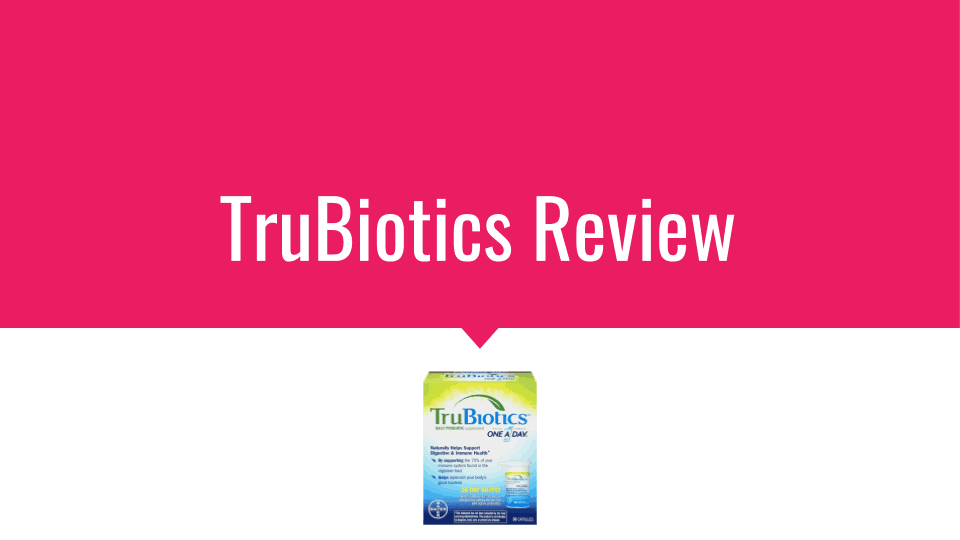 TruBiotics is a probiotic which claims to help improve immune system and digestive health. I decided to try it after reading several positive reviews about it and will review it in this TruBiotics review.

I initially hoped that this will help me with my stomach issues and will share my own experience with it in this review. I will also take a look at some of the other TruBiotic Reviews left out there to see if they match up with my experience.

TruBiotics is a popular probiotic supplement that combines two of the most popular strains, namely Lactobacillus acidophilus LA-5® and Bifidobacterium animalis BB-12®, to improve your digestive system health and improve the number of good gut bacteria.

It’s a well-known fact that our stomach can affect our overall health, and stomach issues can often lead to life-long illnesses (1).

TruBiotics tries to improve our overall immune system by balancing the good bacteria in our health. It uses 2 of the most commonly used strains and has helped a large number of users healing their stomach issues.

TruBiotics comes in a TruPreserve™ bottle, which has been specially designed to keep the bacteria viable until the expiry date without any need for refrigeration (2). Each bottle contains 30 pills which have been manufactured in Denmark using state of the art technology and are worth 1 month’s supply.

A single bottle costs around $14.99 to $20 depending on the place where you buy as prices vary across retailers, which sell TruBiotics such as Amazon, Walmart, Walgreens, CVS, Target, Family Dollar, Dollar General, Rite Aid, etc. Refund policy also depends on the retailer as the company doesn’t seem to have any information about refund policy or guarantee on their official website.

Almost all the ingredients contained in TruBiotics are known to improve digestive health. It’s 2 proprietary strains are among the most popular probiotic strains used in the world, although TruBiotics contains a somewhat low CFU count of 1.5 billion per tablet.

Acidophilus is known to help people suffering from bloating, gas, constipation and other stomach issues. While Bifidobacterium Animalis helps soothe the symptoms of Irritable Bowel Syndrome such as bloating, constipation, and abdominal pain. (5)

There are no known severe side effects of TruBiotics, although it is not the right choice for someone who has lactose intolerance or is allergic. TruBiotics contains skin milk and yeast, which are not commonly used in probiotics as they may complicate the things in patients who have yeast allergy or are sensitive to lactose.

Some users also complain of mild pain after taking TruBiotics, which is a common issue with almost all probiotics (6). In most cases, the pain goes away without any need for medication after few days, although if you face severe pain or any other issue even after 4-5 days, then it’d be a good idea to discontinue the use of TruBiotics.

Some users say that instead of helping with their stomach issues, TruBiotics worsened their problems, and they regret purchasing it. Although the number of such users is minuscule, it may have something to do with the yeast and milk used in it as both of these are known to be common allergens.

The following medical disclaimer is on the Trubiotics website homepage: "This statement has not been evaluated by the Food and Drug Administration. This product is not intended to diagnose, treat, cure, or prevent any disease"

The majority of customer reviews about TruBiotics are positive, and this must give you some assurance that this is a safe product. Although a small minority of users complained in their reviews that it didn’t help them, this is quite normal as a probiotic supplement may not work for everyone.

Another common complaint in the reviews is about the fragile nature of capsules as users say that even if the bottle fell on its side, it’d be enough to break the tablets and thus spill the content of the pills. TruBiotics capsules are somewhat difficult to swallow due to the coating, and this is often the most common complaint of users.

Pharmboy says in his review that TruBiotics helped him deal with his constipation problem, and this worked for him after he has tried several other probiotic products without any result. Jeniffer Hanns regard these as her Miracle Pill as it helped her recover from stomach issues, which she has been facing after giving birth to her son.

Kim Lehman loves TruBiotics as these capsules helped him deal with IBS while Emmy, on the other hand, gave a 1-star rating as TruBiotics didn’t help her at all with her bowel movements.

Most of the TruBiotic reviews are a positive with only small portion of customer giving the product a 1-star review.

In my opinion, TruBiotics is suitable for someone who is suffering from mild stomach issues and is not allergic to milk or yeast. Still, if you are looking to recover from any severe stomach issue, then this may not be the right choice. TruBiotics is not my number 1 recommendation as there are several more potent products out there that can help those who want to improve their digestive tract health.

Both the strains used in TruBiotics are good ones and are known to help with bloating, constipation, gas, IBS, and abdominal pain. Still, the low cell count may hinder the effectiveness of TruBiotics as most other probiotics have much higher cell count in the range of 5 to 50 billion cells per tablet.

TruBiotics doesn’t seem to have any severe side effects as the number of people who suffered from side effects is very low, but in some cases, it worsened the stomach issues. Overall, this is an average product that seems to be priced reasonably. However, still, you can get better value for your money by choosing other more powerful probiotics with multiple strains and higher cell count.