Probiotics And Migraines (What The Science Says)

Having a migraine attack feels like a headache is often on 1 side of the head but for others can be on both sides.

It can feel like a throbbing pulsing sensation that is worse with certain movements of your head.

In this post, I will be reviewing some scientific studies that show the role gut health has on migraine attacks and how probiotics may help. 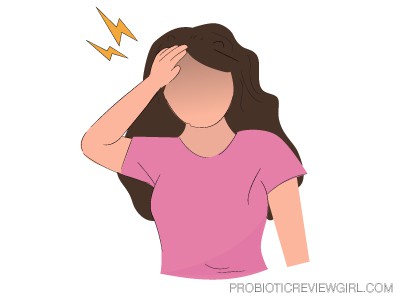 You may feel a migraine in 1 side of your head.

The Gut And Brain axis has been studied more extensively in recent years due to advances in gut research. In 2020 a comprehensive review was published in the Journal of Headache and Pain.

The review concluded that the gut and brain axis could indeed have some sort of impact on migraine attacks but the exact mechanisms of how that happens were not exactly known.

Some ideas for causes included inflammatory markers, gut bacteria profile, serotonin production in the gut, and neuropeptides. The review also showed that those with digestive conditions like IBS, IBD, Leaky Gut, and Chrons were also more likely to be Migraineurs.

One such review from 2015 confirmed that the central nervous system (the brain) was indeed linked to peripheral functions in the intestines as a result of the bacteria in the microbiome. The brain can tell cells lining your stomach t and small intestine to secrete digestive enzyme juices and then send signals back to the brain to notify it that it's full.

Because neurons of these communicate with your gastrointestinal system, people with IBS can often be triggered by stress causing symptoms like diarrhea and constipation. The gut and brain connection may also be responsible for Anxiety & Depression in some people.

Reviews like this one in Pubmed showed that certain Lactobacillus probiotic bacteria were able to have an anxiolytic effect directly through the gut and brain axis. If the gut is responsible for so much, could it also be a cause of neuroinflammation in the brain which is said to be present in those who suffer from migraines.

Leaky Gut May Cause Brain Inflammation 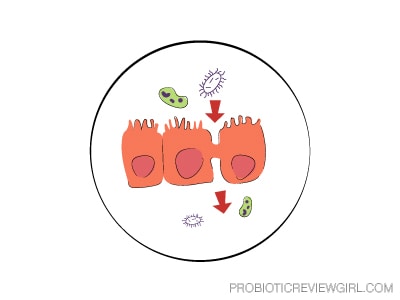 Toxins Can Leak Through The Gaps

If you spend 5 minutes searching through the Leaky Gut Syndrome subreddit you will notice that Migraines or headaches are a major complaint of those sharing their symptoms.

Leaky Gut syndrome happens when damage to the intestines leaves gaps in the tight junctions for toxins to pass into the bloodstream.

The gut barrier is there to let nutrients pass through and to stop things like gluten, heavy metals, pesticides, and lectins from entering the body.

When intestinal permeability happens and these toxins pass through the gut barrier a whole range of symptoms can occur with one of those being inflammation throughout the body including in the brain according to the Temecula Center.

If the brain's immune response triggers peripheral inflammation then this may result in migraine attacks as a result of the toxins being in and around the brain. It also puts pressure on the liver to work harder than it needs to and it may not filter out harmful toxins.

This is the reason so many people with Leaky Gut experience migraines but while this sounds scary it's also a good thing to know since probiotics may be able to help heal Leaky Gut syndrome, decrease intestinal permeability and strengthen the mucosal barrier which in turn could help with migraines for some.

How Probiotics Could Help Some People With Migraines

Unfortunately, probiotic bacteria are not produced naturally by the body unlike vitamin D for example which you can get from exposing your skin to the sun.

Probiotic bacteria in countries like South Korea are part of the everyday diet through things like fermented Kimchi and in some Eastern European countries from fermented Kefir milk.

In the modern-day western diet, highly processed foods are not often fermented so that this probiotic bacteria can grow.

According to one manuscript from 2019, it was found that "gut microbiota dysbiosis contributes to chronicity of migraine-like pain". Gut dysbiosis is simply an imbalance of gut bacteria in the microbiome and it is easy to restore this imbalance through eating more probiotic-rich foods or through supplementation.

As mentioned earlier, when toxins pass through the gut barrier they can reach the brain. One study showed that Bifidobacterium bifidum bacteria may be able to help to strengthen the intestinal epithelial tight junction. This doesn't happen overnight though and could take up to 1-month for changes in your leaky gut to happen. You may also need to alter your diet and follow more steps like taking L-Glutamine alongside probiotics together.

Since a large percentage of serotonin is produced in the gut you will know probiotics are working for you if you start to experience some cognitive benefits like sharper focus, less anxiety, or just a general sense of well-being.

Those with an already healthy gut will likely experience no benefits from probiotics and secondly, it's important to take probiotics at the right time of the day to get the full benefits.

If you are experiencing migraine attacks you should first talk to your doctor since only they will know your full medical history and be able to rule out any other serious conditions that could be causing your migraines. Ultimately this blog post is not medical advice and I am not a doctor.