Probiotic bacteria may help lower inflammatory markers, not in just the gut but the entire body.

In the last several years, studies on the role probiotics play in hair health have started to come to light.

In this probiotics for hair guide, I will share some of the best probiotic strains according to the latest studies.

In this study from 2013 interesting results on skin & hair by accident. The study on mice was not originally set out to test the impact of probiotics on hair growth but instead for general gastrointestinal health. The researchers hypothesized that probiotics may play a role in the "Glow Of Health" that is associated with youth.

Using mechanical sensory methods for fur luster evaluation, it was clear that after just 7-days of feeding the mice probiotic yogurt containing Lactobacillus Reuteri there was an increased thickness, shininess, and general glow in the mice that took the L. Reuteri yogurt compared to mice that didn't take the probiotic. Further placebo tests with the probiotic in drinking water were also carried out successfully.

Interestingly these results were only noted in female mice so it's not sure if these hair growth results would also translate into males and females with hair loss. Both genders however did notice an increase in dermal thickness and subcutaneous hair follicles. It's thought the probiotic yogurt was able to help by creating an Anagenic Follicular Shift, Stimulating Follicular Sebocytes, and more Acidic pH (in Female Mice).

More clinical studies are needed and it's unclear if these same results could also translate into human hair health. Different probiotic strains may also not provide the same results. This study is promising and was only possible because of the researcher's ability to notice changes in the fur. 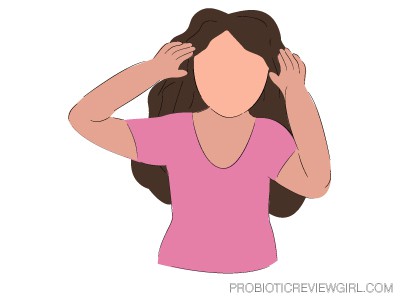 This 2011 South Korean study by Park, Jang-Soon; Lee, and Jae-Sug split mice up into 4-groups. Some were given minoxidil, others were given nothing and one group was given fermented Lactobacillus Rhamnosus probiotic milk. The probiotics were not applied topically.

The mice were shaved and after 8-days from the photo's, it was clear that the mice who had the L. Rhamnosus milk showed the thickest hair. Most of the content in the PDF was written in South Korean so it's difficult to get the full details but this study did show some promise.

In this recent South Korean study from 2020, the researchers hypothesized that probiotics may be able to help with hair growth by increasing blood flow on the scalp in and increasing serum lipid profiles in patients who had alopecia because past research.

Thankfully this study was not carried out on mice instead 23 men who had stage II to V patterns of hair loss and also 23 women with stage I to III patterns of hair loss. For 4-months, twice a day the patients took 80 ml of Mogut® which is a liquid drink made from Korean soybean paste, kimchi, and a mixed probiotic liquid. The drink contained the following probiotic bacteria;

This was the only probiotic bacteria that was the only type of probiotic given to participants and a placebo group was not set up. The results of the study were that after 1-month hair thickness significantly increased and even more at 4-months. The conclusion was that the probiotics started the initiation of the anagen phase in hair follicles without adverse effects like diarrhea.

There is a lot of conflicting information online about probiotics and hair loss so it's not possible to say if probiotics can 100% help everyone with hair growth. You should always consult with your doctor first if you are experiencing any hair loss.

One article I read quoted a Doctor who said that specifically L. Reuteri DSM 17938 was used in a hair growth study but from my research, this was not that fact. There was only mention of the L. Reuteri strain and not DSM 17938 in particular.

Little details like this shared online in blog posts & podcasts show that false probiotic information can get spread easily. To prove probiotics can help, there have to be more high-quality human clinical trials to confirm if probiotics can help with hair loss and growth.

In my opinion, there is no harm in eating more fermented foods or trying a daily probiotic supplement. It may help with your hair health or it may not but either way, it won't make your hair fall out. Some studies do suggest hair growth is a possibility but you should also make sure your overall gut health is in good shape.