Gout can leave you feeling like you have a bunch of hot glass shards and needles inside your big toe joint. It's not any fun at all.

In this guide, I will share some studies on the effects of probiotics on gout.

I will also share if probiotics can be taken with some medicines used for Gout.

Table Of Contents
What Is Gout?
Can Probiotics Help With Gout?
Allopurinol and Probiotics
Final Thoughts 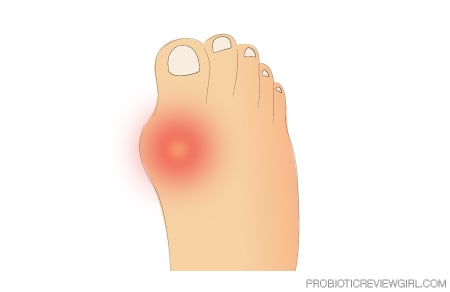 Gout is a condition that happens when too much urate crustals are produced in the body because high amounts of uric acid from purine is left in the blood. This is known as hyperuricemia and is a problem because these crystals can then then cause acute inflammation in various joints in the body.

When someone has gout they may experience swelling, redness and some of these attacks commonly happen at night. Pain may be felt in the big toe and event the weight of a light blanket can cause pain. After a gout attack, symptoms can last for over 1-week or more and be difficult to get rid of.

The "rich-persons" disease can become serious with time when it becomes a risk factor for conditions like arteriosclerosis, nephropathy, cerebrovascular and various cardiovascular diseases. Treatments for gout typically include steroids and NSAID's which over time can damage the stomach lining and lead to conditions like Gastritis.

Can Probiotics Help With Gout?

The study started by claiming that probiotics could be able to efficiently be a promising therapy for gout by degrading purine compounds and preventing hyperuricemia.

To confirm this theory, the study set out to test 55 lactobacillus lactic-acid probiotic bacteria strains that were isolated from Chinese fermented sauerkraut. The study tested if these strains were able to degrade both inosine and guanosine which are two compounds needed to make purine which as mentioned earlier is what leads to gout.

Unfortunately, this study was not carried out on humans but the results that were recorded did show promise for gout. Lactobacillus Brevis DM9218 showed the most promise for gout. It was found that this strain was able to reduce uric acid in Hyperuricemic Rats. The L. Brevis strains were also found to have 99% similarity to Lactobacillus Plantarum WCFS1.

The results of this study showed that in their opinion the use of these probiotic strains could be a promising adjunctive treatment for this suffering from hyperuricemia (gout) in its onset stage. As well as that they also claimed it showed potential to prevent hyperuricemia in the first place.

This next conference paper was published in 2019 by Rostyslav V Bubnov and Mykola Spivak from Ukraine. Their paper was from a talk they did titled "Probiotics effectively restore the function and structure of damaged kidney in gout".

Their study included 12 patients diagnosed with hyperuricemia (gout) and for just 10-days they were given a 108 CFU probiotic supplement containing Bifidobacterium animalis and those with liver fibrosis were given Lactobacillus delbrueckii subsp. Bulgaricus IMV B-7281, Bifidobacterium Animalis VKB and Lactobacillus Casei IMV B-7280. The strains were chosen based on results from separate vitro studies.

The study concluded that over a short period of time choosing the correct individual probiotic strains was enough to treat the signs of MetS, Hyperuricemia, and damaged kidneys as a result of Gout.

Allopurinol is a drug prescribed to decrease high uric acid levels in the blood and some types of kidney stones. Side effects include various digestive symptoms like diarrhea, stomach pain, and also gout flare-up.

According to Drugs.com, there were no known interactions between Allopurinol, Lactobacillus Acidophilus, and Bifidobacterium Infantis which are two probiotic strains commonly found in probiotic supplements. You should consult with your doctor first if you plan to use probiotics with Allopurinol. I am not a Doctor.

From the studies shared it's clear that probiotic bacteria may have some positive effects on gout in some people but not for everyone. Research does suggest probiotics may reduce inflammation in the body and this could help with gout but more research is needed.

One study stated that individual strains may be needed for different conditions. One of the studies was carried out on rats with gout so it's not fair to say these results could translate over to humans.

The sample size of patients in the second study wasn't large enough to 100% say for certain if probiotics were good for gout. More studies are needed but the use of probiotics does look promising. You should always consult with your doctor first and not use probiotics as a replacement for any prescribed treatment.