Table Of Contents
What Is Gastroparesis?
Gastroparesis Can Cause Bloating
Lactobacillus Gasseri OLL2716
Closing Thoughts: Not Enough Research

Gastroparesis is a chronic functional disorder characterized by delayed gastric emptying and a significant negative impact on the quality of life of affected individuals.

Despite the availability of prokinetic agents that target delayed gastric emptying, these drugs often provide only limited or no symptom relief.

According to MayoClinic. Metoclopramide is currently the only medication approved in the United States for the medical management of gastroparesis, but it is associated with various side effects.

Alternative treatment options, such as botulinum toxin injections and gastric electrical stimulation, have been explored but have not consistently demonstrated superiority over placebo.

Gastroparesis Can Cause Bloating

According to this study, bloating is a common symptom of gastroparesis, with 76% of patients reporting at least mild bloating and 41% reporting severe bloating.

The severity of bloating is related to the female gender and being overweight, as well as the intensity of other symptoms such as nausea, postprandial fullness, and abdominal pain. The study also found that bloating impairs the quality of life of those with gastroparesis.

Antiemetic use, probiotic use, and the use of antidepressants with significant norepinephrine reuptake inhibitor activity may also affect reports of bloating. Overall, the study suggests that bloating is a significant issue for those with gastroparesis. 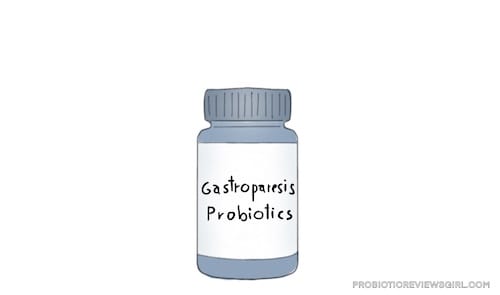 This 2021 study was a double-blind, placebo-controlled clinical trial that aimed to investigate the effects of the LG21 strain of probiotics on mild to moderate delayed gastric emptying.

The study involved healthy Japanese participants aged between 20 and 64 who experienced stomach upset and had delayed gastric emptying which is common in Gastroparesis.

The Japanese research found that there was no significant difference in the effects of the LG21 strain on mild to moderate delayed gastric emptying compared to a placebo.

In conclusion, while there is some evidence to suggest that probiotics may have potential benefits for those with Gastroparesis bloating but more research is needed to fully understand their effects on Gastroparesis.

Individuals with Gastroparesis need to work closely with their healthcare providers to determine the most appropriate treatment options for their specific condition. The content in this blog post is not medical advice and I am not a doctor.