In this probiotics for eczema guide, I will be sifting through all of the clinical trials that have tested good bacteria on the effects of eczema symptoms.

In my closing thoughts, I will honestly share if it's all just a scam or if certain probiotics can genuinely help with the immune response to eczema.

Table Of Contents
12 Probiotic Strains Studied For Eczema
What is Eczema?
What is Atopic Dermatitis?
What Causes Eczema?
How Can Probiotics Help With Eczema?
Can Probiotics Make Eczema Worse?
Probiotics Cleared Up Eczema In 10 Days Reddit Thread
Where To Find Probiotics?
Probiotic Side Effects
Closing Thoughts 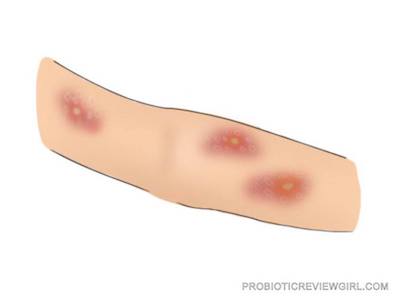 When looking for the best probiotics for Eczema, one of the best ways is to do some research and find high-quality studies that have already tested probiotic strains in a clinical setting and then also use those same probiotic strains later on yourself.

This 2011 study from the Department of Clinical Sciences in Milan, Italy looked at the effects that Lactobacillus Salivarius had in adults with Eczema through a Randomized Controlled Trial.

They claimed that Atopic Dermatitis was a condition that was a fairly common condition caused by inflammation in the skin.

Whilst probiotics in children with atopic dermatitis are common, this Italian study aimed to be one of the few that experimented with the effects on adults.

For this trial 38 adult volunteers confirmed to have Eczema through a "SCORing Atopic Dermatitis index" were recruited to take either take probiotics or a maltodextrin placebo.

The probiotic or placebo was taken daily initially for 18 weeks and at the end of the trial, it was found that the probiotics group showed a "statistical improvement".

Analysis of the bacteria in fecal samples also showed that staphylococci bacteria was decreased, quality of life scores was higher and there were no adverse events reported.

This 2022 study in the frontiers in Nutrition tested the efficacy of a 1-Billion CFU multi-strain Lactobacillus / Bifidobacterium supplement in 40 participants aged from 6 months to 19 years of age.

The trial was a long one of 6-months with the participants taking the bacteria in powder form every day or an unknown placebo. The study aimed to test the effects on inflammation and the immune response.

In the 3rd month of the trial, it was noted that SCORAD results started to decrease by 27.69 percentage points but not in the placebo group.

The conclusion was that at the end of the 6 months there was a clinical response in the symptoms of Eczema and it could be considered in adjuvant treatment for Atopic Dermatitis.

Danish research from 2010 claimed that the damage to the intestinal mucosal barrier was often associated with Atopic Dermatitis and that some good bacteria could potentially help with repairing damage in the intestine.

To test this hypothesis, Lactobacillus Acidophilus and Bifidobacterium Lactis were tested in a placebo-controlled intervention study in 50 children diagnosed with Eczema. Three groups either took a 1-billion CFU of an individual strain or placebo daily for 8 weeks.

Unfortunately, there was no improvement in the SCORAD index compared to the starting scores but it was noted in post hoc analysis later on that there was a significant reduction in the group that took the B. Lactis Bi-07 group. Inflammatory markers were not significantly reduced so the study wasn't that conclusive.

A long-term study published in the peer-reviewed Archives of Disease in Childhood tested a 1-Billion CFU on 454 mothers from 36 weeks gestation to the age of 6 months. The aim of the study was to see what effect Lactobacillus and Bifidobacterium probiotic bacteria would have on the children later on in life.

Upon receiving the allergen, 12.1% in the placebo group went on to develop eczema in the arm whereas only 5.3% did in the probiotic group suggesting that the mother's intake of probiotics several years before could have had an effect.

They aimed to test the efficacy by comparing serum chemokine levels and severity of the Eczema in the infants from before and after the trial was completed with the probiotics versus placebo for 4-months.

After taking the 100-million CFU supplement with FOS prebiotics every day it was concluded that the average oSCORAD index decreased in both the placebo / probiotic groups initially suggesting that the probiotics didn't have an effect.

It was however further concluded that Th2 chemokines, inflammatory chemokines, and Th1 chemokine decreased in the probiotic group while CXCL9 increased putting a spin on the earlier scores suggesting the probiotics did impact immune biomarkers associated with Eczema.

Eczema affects a large part of population with more than 31 million suffering from various types of eczema in the US alone. Many people use the term “atopic dermatitis” while referring to eczema, while in truth dermatitis refers to several conditions that may or may not be similar.

At a basic level, dermatitis refers to inflamed skin and eczema refers to cases of dermatitis that usually have other symptoms also such as redness, itching, rashes, etc. Eczema can be of different types with each type differing significantly from others. Here are some of the main types of eczema:

These are the seven most common types of eczema that affect a large part of population. While there is no clear understanding of the causes, the condition can be a result of various factors such as gut health, allergy, exposure to chemicals or skin irritants, genetics, insect bite, blood flow problems, smoking, stress, exposure to certain metals such as nickel, chromium salt, or cobalt.

Eczema is usually a chronic condition that can last for months or even years. Some types are untreatable and the only option is to manage the symptoms using various types of medicines.

Exposure to certain chemicals or substances can also cause eczema and this is especially the case with people who are prone to allergies or whose skin reacts differently to various chemical compounds. It’s quite common for people to get eczema after prolonged exposure to soaps, detergent powders, household cleaning solutions, aftershave lotion, turpentine and other solvents, and gasoline.

Soaps, and other irritants often cause skin irritation that then develops into eczema. Wet or damp skin is also considered to be a major cause.

What is Atopic Dermatitis?

Most people including doctors use atopic dermatitis and eczematous lesions interchangeably. Although, at closer examination it becomes clear that atopic dermatitis is among the most common types of eczema, but the term “dermatitis” also refers to other skin conditions.

Dermatitis is a term that is used to refer to skin inflammation while eczema usually has several other symptoms in addition to inflamed skin. Symptoms like itching, scaly or flaky rashes, and dry skin separate eczema from dermatitis. While atopic dermatitis has come to signify the most common type of eczema and the usage of this term to refer to eczema is now widely accepted.

Dermatitis can be both acute and chronic, while most eczema is usually chronic. In addition to the usual causes of eczema, dermatitis can also be caused by hormonal changes, viruses, radiation, and hormonal dermatoses.

Dermatitis also has a bit different symptom as it can cause itching, swelling, blisters, dry skin, rashes, skin discoloration, open sores, and a feeling of stinging or burning skin.

How Can Probiotics Help With Eczema?

Because Eczema or Atopic Dermatitis is caused by inflammation in the skin, immune reactions to allergens, and in some cases Dysbiosis it is possible to through the gut and skin axis probiotics in sometimes help people. If Probiotics can reduce this inflammation then in theory that could help with the itchiness, swelling, oozing, and scaly skin.

This 2020 study from Brazil looked at the microbiomes of children with Atopic Dermatitis and discovered that Dysbiosis was present in all of the children.

Dysbiosis is a term that describes an imbalance in gut bacteria and the children in this study were found to have higher levels of bad C. difficile bacteria, lower levels of Lactobacillus bacteria, and an abundance of gram-positive Bifidobacteria.

This 2021 review submitted to the Mucosal Immunity of the Journal Frontiers in Immunology suggested that some probiotic bacteria could potentially help with inflammation in the body and stimulate the immune system.

There is still much to be discovered with the relation between gut bacteria and inflammation in the body and it was suggested that the reason for so much uncertainty was because of how different strains react.

Typically what happens with people taking Probiotics for the first time is that they start to get initial digestive side effects like bloating, gas and diarrhea.

This is because the gut is adjusting to the new bacteria and most people feel worse before they get better. Probiotics do not usually make Eczema worse but they don't always work.

This 2017 Randomized Controlled Trial tested 10-Billion CFU of Lactobacillus Rhamnosus GG in infants during the first 6-months of their life and found that it didn't prevent the development of eczema later on in life.

They were however no reports of the probiotic making Eczema worse later on or having any adverse effects which are a positive.

6 years ago in the official Eczema subreddit, a user called JPSFG started a thread claiming that probiotics had cleared up most of their Eczema in just 10-days.

They claimed that as an adult they had recently developed extreme itching on their arms, scalp, and around their neck area long with seborrheic dermatitis.

Instead of jumping straight in with probiotic supplements, they started drinking Hapi Yogurt which contains Lactobacillus Casei bacteria.

After noticing some initial improvements from this, they then went ahead and purchased Culturelle chewable tablets which contain Lactobacillus Rhamnosus GG and Prebiotic fiber.

This was when they claimed to start noticing "great results" on their Eczema by noticing their hands getting less dry after washing them and they stopped having to use Cera Ve lotion.

Another user called duckii426 replied sharing that they had similar results after drinking Kombucha with Kefir and Lycheemochi funnily enough shared that they accidentally had good results after eating Kimchi for months.

Where To Find Probiotics?

It's clear that if you have an imbalance in gut bacteria then getting more Lactobacillus and Bifidobacteria through dietary means may help reverse dysbiosis leading to benefits in some cases. The next step then is to find high-quality sources that can contain living probiotic bacteria.

Some great options include kefir milk, miso paste, kombucha, sauerkraut, raw cheeses, and some organic yogurts. Some of these plant-based foods also provide the benefit of having prebiotic fiber that can act as fuel for the bacteria in your colon. Keep in g mind the avoid foods with vinegar as this can kill probiotic bacteria.

Whilst no adverse reactions were reported in any of the studies I shared earlier in this guide and the FDA claims that in healthy individuals probiotics are generally safe some people should avoid taking probiotics.

If you are immunocompromised, have a serious illness, SIBO or similar bowel issues do not take probiotics. If in doubt, consult with your Doctor beforehand. I am not a Doctor. When taking probiotics for the first time you may notice symptoms like bloating & gas that usually pass after a week or two.

Whether or not probiotics help with eczema is still unclear because of a lack of double-blind clinical preliminary studies carried out in adult humans.

The use of probiotics in pregnant mothers does seem to indicate that the bacteria can have some impact later in life, particularly allergic reactions.

Different bacteria seem to have varying results resulting in no clear treatment that can be given to everyone looking for an improvement in atopic dermatitis.

The best advice would be to first contact your doctor, then start eating cultured yogurts along with fermented vegetables. This will give you a safe wide range of friendly bacteria that can start making an impact on your gut health and then maybe on your skin barrier.