In this probiotics for diabetes post, I will be digging through all the studies currently out there.

I managed to find a new study that showed amazing results for type 1 diabetes in children and a review of 9 placebo trials for type 2 diabetes in adults.

First, let's start with the basics.

What Is Type 1 Diabetes? 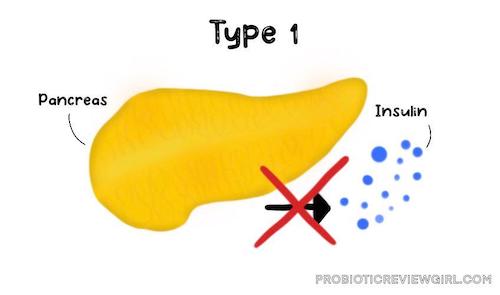 Type 1 diabetes is the less common form of diabetes as it’s found in only 5-10% of the people who suffer from diabetes. Type 1 diabetes is a chronic disease in which the insulin-producing cells in the pancreas are destroyed. This effectively destroys the ability of our body to make insulin.

Insulin is an essential hormone that is vital for our metabolism as it helps our body cells use glucose or sugar for energy. Almost all food items contain glucose and insulin allows this glucose to pass from our bloodstream into the body cells.

While there is no clear information about the actual causes of type 1 diabetes, researchers believe that it’s caused by some autoimmune reaction due to which the body’s immune system attacks the cells in the pancreas that produce insulin.

What Is Type 2 Diabetes? 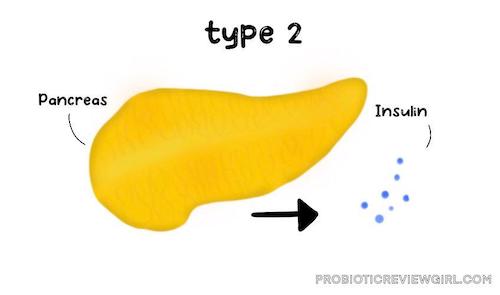 Type 2 diabetes is the most common form of diabetes, and it affects anywhere from 90% to 95% of patients who suffer from diabetes. Earlier on type 2 diabetes was mostly associated with people who were above the age of 45, but nowadays it is also found in youngsters, teens, and children. Medical practitioners associate this rise in type 2 diabetes with the changing lifestyle, obesity, and poor eating habits.

In Type 2 diabetes, body cells don’t respond well to insulin, and this prevents the absorption of glucose into the blood. This condition is known as insulin resistance. Your pancreas starts producing more insulin to deal with this issue and this leads to a condition where the pancreas can no longer keep up and the blood sugar level rises as the glucose or sugar is not being absorbed into the body.

Heightened levels of blood sugar are extremely harmful to the body and type 2 patients thus have a higher risk of developing heart disease, kidney disease, and vision loss. Initially, doctors try to keep the blood sugar under control with medicines and when even medicines are not enough, then type 2 diabetics have prescribed insulin injections whose dosage and frequency depend on the severity of the condition.

Probiotics are live good bacteria and fungi that may be beneficial for human health. The human gut and the gastrointestinal tract serve as hosts to billions of such beneficial bacteria that perform an important role in various metabolic functions such as digestion and help in the functioning of our immune system.

Any imbalance in the number of probiotics in our body can have some severe complications. Probiotics are also recommended for treating various diseases such as irritable bowel syndrome, inflammable bowel syndrome, diarrhea, Crohn’s disease, and various other ailments that affect the gastrointestinal tract.

Probiotics are usually available in the form of capsules or tablets, and they can also be classified based on the number of live bacteria present in a dose. Probiotics can come in various doses that range from 500 million CFUs (colony-forming units) to 50 billion CFUs. A probiotic supplement can contain a single strain of bacteria or can have multiple strains.

Can Probiotics Help With Type 2 Diabetes?

Not all Probiotic is the same with different strains of lactobacillus, Bifidobacteria, and Saccharomyces yeast all having varying effects depending on many different things. In 2019 however, a review published in the Diabetes/Metabolism Research journal did a meta-analysis of 9 different randomized control trials on probiotics and type 2 diabetes to figure out if they could help or not.

The review carried out by researchers from The Department of Clinical and Preventive Nutrition Sciences, School of Health Professions, Rutgers University, Newark, New Jersey had some positive findings.

They concluded that Multi-strain probiotics with a CFU count of 7 million to 100 Billion CFU could be taken daily for 6 to 12 weeks "may work" for improving Glycaemic control in adults who had Type 2 Diabetes.

The best probiotic strains the review found for Type 2 Diabetes were the following:

Whilst the review had an optimistic outlook on the use of gram-positive bacteria for insulin resistance in type 2 diabetes mellitus, they were also careful to state that further research was needed on more probiotic strains, other doses, and different durations of exposure.

Can Probiotics Help With Type 1 Diabetes?

I was unable to find a high enough quality meta analysis on the use of probiotics & type 2 diabetes but I did find this amazing study published on the 26th of June 2021 that tested a multi-strain probiotic on 96 children aged 2 to 12 years of age with new-onset type 1 diabetes mellitus.

Groups of children were at random selected to receive a placebo or the 112.5 billion CFU De Simone formulation from Visbiome®. The multi-strain probiotic contains the following strains:

The children in the probiotics group took this supplement every day for 3-months or a placebo and all of their "HbA1c, fasting C-peptide, blood sugar records, and insulin dose scores" were recorded at the beginning of the trial and then again on day 90.

The probiotic group had decreased Hemoglobin A1C blood sugar levels, and lower insulin dose while some children even experienced remission.

The study concluded that children who followed their standard prescribed treatment whilst also taking probiotics daily had better glycemic control and insulin control.

The study mentioned that no adverse events were reported but at a 100+ billion CFU count, it's likely the children will have experienced some minor side effects like diarrhea in the beginning. More studies are needed on the use of probiotics for type 1 diabetes and they cannot cure type 2 diabetes.

Who Should Not Take Probiotics?

While the health benefits of probiotics far outweigh their side effects, some people should avoid taking them unless with the explicit advice and permission of their doctors. The following people should not take probiotics:

Probiotics For Insulin Resistance In Alzheimer's

This 2017 study carried out by universities in Iran was published in the peer-reviewed Medical Journal of The Islamic Republic of Iran (MJIRI). The paper claimed that insulin resistance was a common cause of both Alzheimer’s disease and type 3 diabetes with disruptions to insulin possibly inducing Alzheimer’s Disease.

The study concluded that the Lactobacillus & Bifidobacteria was able to "control glycemic status" related to Alzheimer’s disease. It showed that rats who were surgically made to have Alzheimer's also had increased Serum glucose, insulin levels, and HOMA-IR index and that rats fed the probiotics had lower insulin levels and insulin resistance compared to other control groups of rats. It's unclear if these effects could also transfer over to humans.

A randomized controlled trial published in the peer-reviewed British Journal of Nutrition looked at the effects of gram-positive Lactobacillus Casei Shirota versus placebo on preventing insulin resistance which results in the pancreas making more glucose than it needs to.

17 health participants were recruited for this trial with 8 taking randomly selected to receive a probiotic and the other 9 simply taking nothing. The L. Casei bacteria was drunk twice per day in fermented milk for 4 weeks at an unknown CFU count whilst following their normal diet for 3 weeks and then eating a high fat/carb diet for the final week.

An oral glucose tolerance test was used to check insulin levels before and after feeding. The results showed a difference between the control and probiotic groups with a 27% reduction in whole-body insulin sensitivity in the group control whilst the L. Casei probiotic group had normal insulin sensitivity maintained even after overeating. More human studies are still needed to confirm L. Casei's efficacy on type 2 diabetes.

This 2015 study was carried out by three engineers from the Department of Biological and Environmental Engineering, Cornell University, Ithaca, NY, and it was published in the Journal of Diabetes.

The engineers somehow managed to engineer an unnamed Lactobacillus bacteria strain that was said to be able to stimulate the secretion of the amnio acid Glucagon-like peptide-1. This is significant because studies have shown that GLP-1 was able to "suppress" glucagon secretion whilst stimulating peripheral glucose uptake which can control blood glucose

For three months various groups of rats that were made to have type 1 diabetes were either given the Lactobacillus bacteria daily for 90 days with those rats eventually said to have "significant increases in insulin level and be more glucose tolerant compared to other groups of rats. The rats were better able to control blood glucose without needing more insulin because of the probiotic's effects on peripheral glucose uptake.

Gestational Diabetes sometimes occurs in Women during pregnancy who do not always have a previous history of diabetes. It can affect the baby's pancreas causing it to have low blood glucose levels putting it at risk for breathing issues, obesity later on and potentially type 2 diabetes later in life.

In the second study, 13% of mothers who took Lactobacillus Rhamnosus GG and Bifidobacterium Lactis Bb12 during pregnancy went on to develop Gestational Diabetes Mellitus whereas 36% developed it in a placebo group and 34% did in a control group. Both of these studies did not report any safety concerns and the results were incredibly promising.

Some of the studies on the use of Lactobacillus & Bifidobacteria strains make it seem like probiotic supplements can be good for Diabetes but it's important to never use probiotics as a replacement for any prescribed treatment. Probiotics cannot treat diabetes and I am not a doctor.

All of the studies use probiotics along with prescribed treatments and they were taken for several months at a minimum. The best probiotic strain for Diabetes seems to be Lactobacillus Acidophilus or Lactobacillus Rhamnosus but multi-strain probiotics are recommended. If you want to take probiotic supplements then try organic yogurt or fermented kefir milk.