In recent times, research into gut health has shown that probiotics may be able to help improve respiratory virus infection rates and help release antibodies.

In this guide, I will share how probiotics can support the immune system via the microbiome and protect against the common cold.

Table Of Contents
What is Influenza?
How A Cold or Flu Starts
How Do Probiotics Help?
Probiotics For Stomach Flu
Why People Get Sick In The Winter More Often
70% Of Immunity Is In The Gut
Use Fermented Probiotic Foods
Vitamins For Colds
Closing Thoughts: Probiotics Can Help 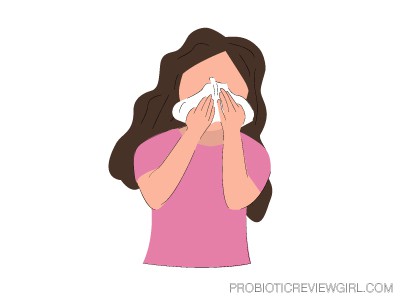 The influenza virus is a respiratory virus that can infect the nose, throat, and lungs. The flu can only be a viral infection whereas a cold could either be viral or bacterial so if you have a viral flu infection then antibiotics won't be able to do anything to stop the virus from spreading.

How A Cold or Flu Starts

If you have the flu then most of the time your symptoms will be worse than if you just had cold and you may have a higher fever, stronger symptoms and for some people according to CDC the flu may result in serious health problems. If you have any worrying symptoms then you should contact your doctor as soon as possible.

How Do Probiotics Help?

This 2009 study from Wisconsin, USA gives some insight into what effects probiotic supplementation may have on influenza symptoms such as coughing, fever, and rhinorrhea in children aged 3-5 years old.

The study recruited 326 children and split them into three groups. The first took a placebo, the second Lactobacillus acidophilus and the third also took L. Acidophilus but with Bifidobacterium Lactis bacteria as well.

This study was carried out with the kids taking probiotics at an unknown CFU twice per day for 6-months. In all areas, during the 6-months kids who took either 1 or 2 probiotic strains had less coughing, less rhinorrhea, decreased fever, fewer days of school, and less antibiotic usage.

This study made it clear that probiotics helped these kids battle against cold symptoms during the 6-months. While this study was not carried out in adults, the results could potentially be similar to probiotic supplementation.

Probiotics may help you avoid getting the cold and flu by strengthening the intestinal wall which makes it harder for viruses and bacteria to grow and multiply. If you have a weak intestinal wall then you may get sick easier because of how much of the immune system is based in the gut.

Colds don't always affect the nose, throat, and lungs but sometimes can infect the stomach in what is known as a stomach virus or stomach flu which can last for up to 14-days. This happens then when the virus is able to infect the stomach of the small intestine in your digestive tract.

For viral gastroenteritis, Doctors won't prescribe antibiotics because it's a virus but it's important to first rule out any bacterial infections. According to NIDDK, doctors may recommend patients with a stomach virus take probiotics.

This may be a treatment because studies suggest that probiotics may shorten the length of time someone has diarrhea but more studies are needed and you should always talk to your doctor first before using probiotics for a stomach virus.

Why People Get Sick In The Winter More Often

In the winter, viruses are able to replicate easier because of the cold dry weather that viruses flourish in.

The other reason is that during the winter when it's colder people tend to stay inside more often and are in closer contact with each other in poorly ventilated rooms.

The immune system may have a harder time working in the winter with reduced blood flow and also because it's harder to get vitamin D when there is a lack of sun.

According to sources from the Netherlands, 70 to 80% of the immune cells are located in the gut where the probiotic bacteria live. The intestinal microbiota is connected to the mucosal immune system and intestinal epithelial layer.

Because of this, if you want to strengthen your immune system you should focus on nourishing your gut microbiome with foods that contain probiotic bacteria.

As well as eating foods that promote the health of your gut it is equally as important to avoid foods that contribute to inflammation & damage to the gut. These include excessive consumption of alcohol, fried foods, processed foods, and foods containing high amounts of sugar.

You don't always have to use probiotic supplements to get probiotic bacteria into your diet instead you can use fermented foods like Kimchi, Sauerkraut, Organic Yogurts, and Kefir Milk to get a wide diverse range of probiotic bacteria.

According to the Georgia State University, fermented vegetables and dairy contain a variety of lactic acid bacteria that may partially protect against bacterial infectious diseases, such as Streptococcus pyogenes and Streptococcus pneumoniae.

In the Georgia State University study, it was stated that heat-killed probiotics bacteria like Lactobacillus casei DK128 (DK128) provided protection against the influenza H3N2 virus. In mice, the strain was able to control lung viral loads and reduce inflammatory cytokines to lower levels that were high due to the virus.

Vitamins have also been studied for flu & cold prevention and taking the along with your probiotic bacteria may also help your immunity. Some probiotic foods like fermented cabbage are also packed with vitamin C, K, and Iron at a higher level than if they were not fermented.

Vitamin D and Zinc may be some of the most important vitamins for protection against common colds according to this study by reducing the severity of symptoms. During the winter when there isn't as much sunlight you should take a Vitamin D supplement. Lactobacillus Reuteri probiotic bacteria was also shown to increase Vitamin D absorption by 25.5%.

Studies have confirmed that the gut is important for overall immunity so taking care of it by limiting inflammation, eating probiotics, and prebiotics daily, and getting the appropriate vitamins is important for protecting yourself from the flu. You should wash your hands regularly after being out in public if you have touched surfaces.

It's important to mention that taking Probiotics after you have caught the flu may not do much. It takes time to improve gut health and probiotics seem to work better as a prevention method rather than a cure. You can easily get probiotics daily by drinking kefir milk every day for breakfast. Antibiotics may not be the best solution for colds & flu because they can damage the good bacteria in your gut.