Obsessive Compulsive Disorder or OCD for short is a mental health condition that is said to affect 1.2% of US adults with females more likely to have the condition in a given year. Having OCD can negatively impact a person's life by making everyday tasks difficult.

Whilst research on OCD has been done, there are still many unknowns and exact causes are not yet known. This probiotics for OCD guide will look at the studies on the microbiome and the gut/brain connection to see if any probiotic strains can help with the condition or not. 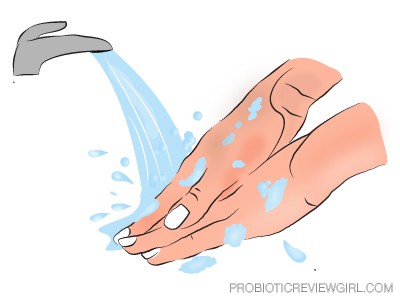 Someone with OCD may obsessively wash their hands.

The first thing that will pop into most people's heads when they think of OCD is excessive hand washing ever since it was made popular by films and other media.

For people with this mental health condition, it can be frustrating because the reality is that it causes repetitive anxious thoughts that impact many other things decreasing the quality of a person's life. Treatments typically include CBT therapy or SSRI medication.

Exact causes are not yet known but it's thought that it could be down to genetics, brain chemistry levels, low levels of serotonin, and potentially the microbiome.

Individuals with the condition may be unable to fall asleep because they are worried that they have left the door unlocked, the oven turned on or a window open. Some pregnant women may experience a lot of stress, excessively clean baby bottles and constantly check on the health of their baby.

The Gut and OCD Connection

IMCJ reviews like this one from Jeremy Appleton, have shown that the gut and brain are connected through an axis and the microbiome can affect your mental health.

If you are lacking certain Lactobacillus Probiotic strains then it's possible that you could eventually suffer from things like anxiety or depression.

Because OCD is also a mental health illness similar to anxiety it has been hypothesized that the gut & brain connection could also be closely linked to gut health.

If you have chronic inflammation in your gut this can lead to intestinal permeability which can cause gaps in your t-junctions (leaky gut) to widen allowing toxins to break through to the bloodstream. Let's take a look at what the studies say.

In 2014, researcher John C Rees published a hypothesis in PubMed that suggest Obsessive Compulsive Disorder could be down to gut microbiota dysregulation.

He claimed that "OCD was debilitating" and that stress or antibiotic usage can both "alter the gut microbiota" leading to the onset of OCD symptomology.

One example he gave was "the stress of pregnancy" having the potential to alter the gut bacteria and lead to OCD symptoms. He suggests re-introducing specific species of probiotic bacteria into the microbiome as a solution.

This study from the Department of Biological Sciences at Lehigh University in Pennsylvania, USA tested this hypothesis. The BALB/cJ inbred mice were first induced with RU 24969 a research chemical that is often used in medical studies to induce OCD-like behavior.

In experiment A, the mice were either given a pretreatment of saline solution daily for 2 weeks or a 1-billion CFU L. rhamnosus probiotic. It was found the probiotic group had reduced OCD symptoms through tests for example that monitored marble-burying behavior.

In experiment B, the mice were once again given a pretreatment of L. Rhamnosus but this time instead of just a saline solution a group of mice was also given the anti-depressant fluoxetine which is often prescribed for OCD.

Amazingly, it was claimed that 2 weeks of the Rhamnosus probiotic strain was just as effective as 10mg of fluoxetine treatment for 4-weeks. It was unclear what side effects both treatments caused in the groups of mice.

This Iranian study described OCD as a "neuropsychiatric disorder" that when treated with "serotonergic antidepressants" could potentially also cause serious side effects. Whilst probiotic supplements do cause side effects before they work, they are usually minor and pass after a couple of weeks. This study also tested the effect of Lactobacillus in an animal model.

30 rats were used in this study and 24 were injected with quinpirole hydrochloride to induce OCD-like symptoms in the rats. Group 1 and Group 2 of the OCD rats were fed L. casei Shirota & fluoxetine daily for 4-weeks and Group 3 normal saline. The negative control group of rats did not receive the injection and therefore did not have OCD symptoms.

The official OCD subreddit was created in 2009 and currently has over 155,000 members who regularly discuss all things OCD. In 2022, a new thread was started looking for opinions on people's experiences with probiotics. The first reply was from a Redditor called Valuable-Sandwich-59 who said that they had both IBS & OCD but they were yet to find a probiotic that helped them.

Interestingly they shared that their friend with OCD completely fixed their issues with probiotics but that it depends on the severity of the OCD and for how long a person has had it. TrYJoRdY said that they were taking probiotics along with magnesium and that already they were starting to feel better after a couple of weeks. Someone else said that their Doctor said over 90% of serotonin is made in the gut so probiotics could help.

More human clinical trials are needed as it's unclear if the positive results in mice & rats can also cross over to humans who have OCD. One clinical trial involving 15 human participants with OCD is being carried out in MacAnxiety Research Centre, Ontario Canada.

The trial is testing the Lactobacillus Helveticus & Bifidobacterium longum probiotic strains but the results have yet to be published for the public to read. The results of this clinical study will be able to give us a clearer answer on whether or not probiotics really can help with OCD but until then nobody can say for certain if probiotics can help or not.

Dr Sara Mesilhy told us that "Probiotics may help control OCD symptoms; based on the finding that the probiotics help lowering the production of the stress-inducing hormone cortisol that has been found in higher levels among OCD patients. However, more extensive research is required before implementing probiotics in the clinical management of OCD."