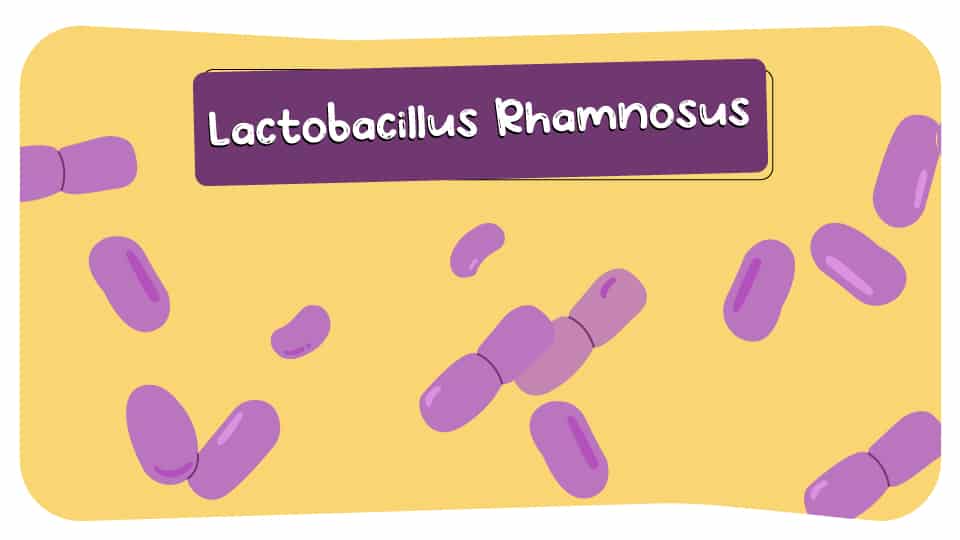 Lactobacillus Rhamnosus has been studied extensively and some scientists even tout it as the most studied probiotic strain.

It is a gram-positive rod shaped strain that is commonly found in the vaginal & gastrointestinal tracts of humans.

This L. Rahmnosus will take a look at some of these studies and share the results for various different health conditions.

They discovered that preclinical animal studies did suggest that the use of probiotics could help with anxiety but in their opinion, the clinical studies on humans could not yet prove the same thing. Interestingly out of all the preclinical studies conducted on animals, L. Rhamnosus was the only strain that was identified as an anxiolytic species.

This analysis did not claim that L. Rahmnosus and other probiotic bacteria have no effect on human anxiety but that further clinical studies were needed with people suffering from anxiety disorders. Currently, there have not been enough studies, and not every probiotic strain has been studied.

In this 2017 randomized clinical double-blind placebo study from New Zealand, over 300 pregnant women with gestational diabetes mellitus were given Lactobacillus Rhamnosus HN001.

The study had the women take the L. Rhamnosus probiotic strain daily and they were then assessed at 24-30 weeks. The study concluded that L. Rhamnosus HN001 did reduce gestational diabetes in women who did not take a placebo.

This 2015 study from South Korea was carried out on 20 male mice divided into two groups of 10. Half were given Lactobacillus rhamnosus GG (LGG), every day orally for 4-weeks, and half were given a placebo for the same time.

It was observed that in the male mice receiving the Lactobacillus rhamnosus GG (LGG) bacteria, glucose tolerance was improved and so was endoplasmic reticulum (ER) stress. These findings showed an anti-diabetic effect according to the study. It's unclear if this could also work in humans.

This 2016 review published in the Experimental and Therapeutic Medicine journal concluded that gastric ulcers may develop because of an imbalance between the damaging factors and the defense mechanisms in gastric mucosa. Studies have shown L. Rhamnosus GG may accelerate the healing of gastric ulcers.

The Emirian researchers stated the use of Probiotics for gastric ulcers was promising but needed more clinical studies to be sure. Lactobacillus Rhamnosus GG was a strain that showed promising results in several gastric ulcer rat studies but further human trials were needed to establish efficacy.

One side effect of antibiotic usage sometimes is diarrhea in both adults and children. A systematic review and meta-analysis from 2015 took 1499 participants and sought to check if Lactobacillus rhamnosus GG could stop antibiotic associated-diarrhea.

One placebo trial in the review showed that Lactobacillus rhamnosus GG was effective in preventing antibiotic-associated diarrhea in both adults and children but more studies would be needed as the quality of evidence in their opinion was not strong enough.

Rotavirus outbreaks in hospital settings can cause havoc and increase medical costs dramatically. This 2011 meta-analysis published in the Alimentary Pharmacology & Therapeutics journal sought to check if Lactobacillus Rhamnosus GG could be a low-cost prevention strategy for healthcare-associated gastroenteritis diarrhea in children.

In total, 1092 children in this study, and half were given Lactobacillus Rhamnosus GG or a placebo during the duration of their hospital stay. The study stated that L. Rhamnosus was associated with significantly lower rates of diarrhea and that the strain was well tolerated meaning that it was safe.

Following a Low FODMAP diet has been suggested in the past as one way to prevent IBS and in 2014 this study tested that hypothesis by looking at the differences between taking Lactobacillus Rhamnosus GG and the Low FODMAp diet.

123 patients with IBS between 2009 and 2013 were recruited into this randomized unblinded placebo trial. For 6 weeks some people either followed a Low FODMAP diet, L. Rahmnosus GG, or a standard Danish diet.

They were asked to self-monitor and fill out an IBS questionnaire concerning their symptoms. The results showed that both the Low FODMAP diet and Lactobacillus Rhamnosus GG helped to reduce IBS symptoms.

This 2016 clinical trial from the Department of Social Pediatrics and Allergy, N Copernicus Hospital, Medical University of Lodz, Lodz, Poland was published in the Allergy & Asthma Proceedings journal. 100 children aged between 5 and 12 years old all with a sensitivity to grass pollen and associated allergic rhinitis took part in the study.

For 5 months the children were either given a placebo capsule or Vitamin D 1000 IU, Lactobacillus Rhamnosus GG capsule. The CFU count of the L. Rahmnosus strain wasn't mentioned. After 5 months the children had improvements with a symptom-medication score, lung function and probiotic supplementation showed a better clinical and immunologic response in children with allergic rhinitis.

This 2012 study was carried out on 425 infants from New Zealand suffering from a mix of Dermatitis, Eczema, Atopy, Asthma, and Rhino Conjunctivitis. It was a double-blind placebo study and the infants were given the 6 Billion CFU of Lactobacillus rhamnosus HN001 probiotic strain daily for the first 2-years of life.

By 4 years of age, the presence of Rhino Conjunctivitis and Eczema was significantly reduced but for Asthma, Atopy & Dermatitis there was no difference. The study stated that for High-Risk infants daily supplementation of L. Rhamnosus HN001 probiotic bacteria may have a protective effect against Eczema later in life.

In 2013 some of the same Doctors and Scientists from the first study set out to again test L. Rhamnosus HN019 for allergies (eczema) in kids up to the age of 6 years. The HN019 strain did not have the same effect as the HN001 strain and which suggests that benefits may be species-specific and that not all L. Reuteri strains work in the same way.

This 2015 review published in the Beneficial Microbes peer-reviewed journal stated that food allergies are a major problem with children living in western countries. According to the BBC, "Food allergy now affects about 7% of children in the UK and 9% of those in Australia, for example. Across Europe, 2% of adults have food allergies" and it's thought to be more common in those with Asian ethnicity.

This review further claimed that Lactobacillus rhamnosus GG (LGG) supplementation in early life may be effective for allergies and preliminary evidence shows that L. Rhamnosus accelerates oral tolerance acquisition in cow's milk allergic infants. The review did not make any claims that taking the probiotic strain later in adult life could help with Lactose Intolerance in any way.

White adipose tissue (epididymal and perirenal) was reduced and the study from Seoul National University said that the amount of conjugated linoleic acid produced by the L. Rhamnosus strain was what caused the weight loss in the obese mice. I could not find any studies for weight loss in humans because of L. Rhamnosus and it's not clear if conjugated linoleic acid can also be increased in humans.

Because Lactobacillus Rhamnosus is one the most extensively studied probiotic strains on humans there is some evidence that suggests it may have some benefits for leaky gut syndrome also known as intestinal permeability.

Disruption to the tight junctions may be a major problem in those leaky gut syndrome along with intestinal permeability. The manuscript suggests that L. Rhamnosus could also help with ethanol-induced intestinal mucosal permeability but more studies are needed and this review leaves a lot of unanswered questions.

Contrary to popular belief Lactobacillus Rhamnosus isn't used in a lot of commercial yogurts you can buy in the stores for whatever reason. In my list of what yogurt has the most probiotic bacteria, there were only 3 yogurts out of 11 that had the L. Rhamnosus probiotic strain.

In some of the studies I mentioned in this guide they used Yogurt or Fermented milk with the L. Rhamnosus stain but they make the yogurts themselves and take great care in making sure the bacteria is a live and potent with nothing that could cause irregularities in the studies.

Out of all the studies featured in this Lactobacillus Rhamnosus guide, there were no serious side effects in any participants reported.

Probiotic Supplementation is popular and most ingredients are FDA-approved. If you are making your own fermented foods always make sure to use clean sterile cooking utensils.

Taking Lactobacillus Rhamnosus in probiotic supplements could cause gas, bloating, diarrhea, stomach cramps, and other digestive related side effects but these usually pass.

Never take probiotic supplements if you are immunocompromised and if you have any symptoms that worry you, Consult with a doctor asap. I am not a doctor and this guide is not medical advice. Probiotics should not be used as a replacement too prescribed medication.

This guide makes it clear that Lactobacillus Rhamnosus has been studied extensively. It would be better if there were more studies carried out in humans for allergies like Lactose Intolerance and Eczema.

These studies and the fact it is generally recognized as safe by the FDA have proved that Lactobacillus Rhamnosus is safe for human consumption. It is a probiotic strain that is widely used in many different probiotic supplements.

Culturelle Digestive Daily Probiotic is a supplement that contains pure Lactobacillus Rhamnosus GG probiotic bacteria and prebiotic fiber at a 1 billion CFU count. The customer reviews are mostly positive as well with a close to near-perfect 5-star rating.

It doesn't have any other Lactobacillus probiotic bacteria so it would be ideal if you were looking to test only the L. Rhamnosus strain for something specific to yourself.