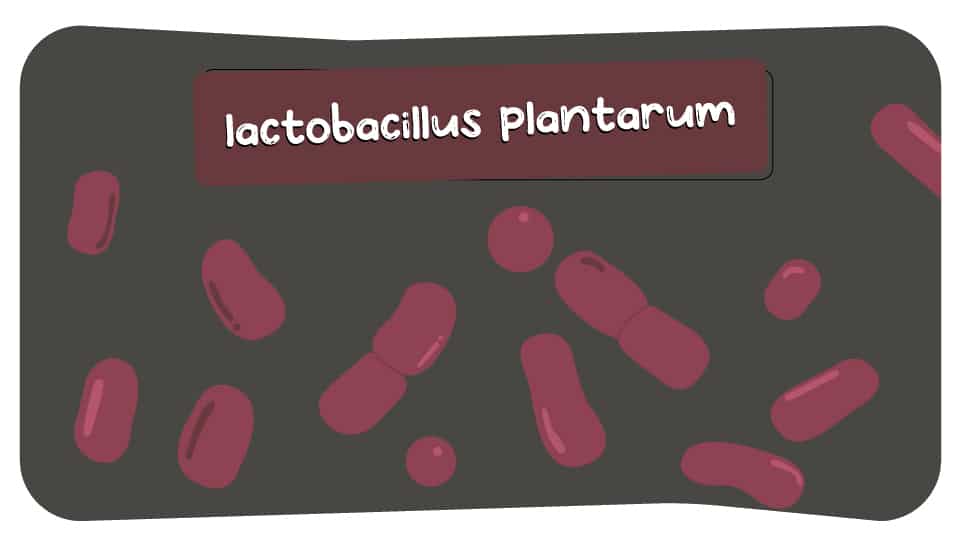 Lactobacillus Plantarum is a gram positive probiotic bacilli shaped bacteria that comes from the Lactiplantibacillus genum. It can be found in dairy & fermented foods like Kimchi, Sauerkraut, Miso and other Lacto-Fermented foods.

In this guide I have combed through 5 of the most in-depth Lactobacillus Plantarum studies to try and figure out what health benefits this strain may have for humans.

Each study is totally different and some are better than others. I share how the studies were conducted and if any results were found from the scientists conducting them.

In this well conducted study South Korean scientists from the research and development centre of Medytox INC conducted a study on 3 groups of mice fed various diets.

The mice were split into three different groups for this study. Group 1 were fed a Normal Chow Diet, Group 2 High Fat Diet and Group 3 also a high fat diet. Groups 1 and 2 followed this same diet for 12 weeks but Group 3 switched to a high fat diet with Lactobacillus plantarum LMT1-48 at 8-weeks to check if it would help them lose weight.

The results showed that the group of mice that switched to taking the L. Plantarum amazingly showed an anti-obesity effect. Visceral and Subcutaneous Fat was lower and this was done by "downregulating plasma levels of leptin, resulting in inhibition of fat accumulation and adipocyte proliferation in HFD-fed mice." (1)

This study conducted by Chul Sang Lee & Sae Hun Kim from Korea Univeristy, Seoul looked at the potential benefits of probiotic bacteria and more specifically as an Anti-osteoporotic for dexamethasone induced-osteoporosis.

9-probiotic strains were pre-screened to test if they would be able to survive a low PH solution in bile salts which simulated stomach acid. In short it was proved that the strains would be able to colonize the small intestines which is important for the study to be successful.

Lactobacillus plantarum A41 and L. fermentum SRK414 were two strains that stood out as winners by proving the highest anti-oxidative properties and inhibiting inflammatory markers that were monitored. Bone metabolism markers were also shown to be regulated L. Planatarum was a strain to showed potential for Osteoporosis based on all of the markers studied.(2)

I suffered with IBS for a number years so I like to pay close attention to any studies that may show benefits from probiotic usage. This clinical trial published in 2012 stated in the title that "Lactobacillus plantarum 299v (DSM 9843) improves symptoms of irritable bowel syndrome".

The study included a diverse range of 214 participants with IBS over the age of 18 that recruited by general practitioners in India. To make sure their IBS wasn't actually an intestinal infection. Other disease were also ruled out so it's clear that all of the participants in fact only had IBS.

78.1% of the group taking the L. Plantarum probiotic capsule daily reported good or excellent results for their IBS symptoms versus only 8.1 reporting either good or excellent in the placebo group. The results were conclusive from the large data-set on Lactobacillus Plantarum's potential benefits for IBS symptoms. One participant in the study did report transient vertigo as a side effect. (3)

This study looked at whether or not taking the probiotic supplement Lactobacillus plantarum CJLP133 orally would be beneficial for Atopic Dermatitis or Eczema in children aged 12 months to 13 years old. There were 118 participants that started but for reasons unknown only 83 completed it.

Part of the group were given a placebo and the other half took the L. Plantarum CJLP133 strain twice per day for 12 weeks at markers like Atopic Dermatitis scores, eosinophil counts, serum total IgE and cytokines were all evaluated to check if the L. Plantarum strain helped or not.

The group of 9 South Korean Doctors and scientists that conducted this study concluded that taking an oral supplement of Lactobacillus Plantarum CJLP133 twice daily for 12 weeks was beneficial in the treatment of Pediatric Atop Dermatitis. This study had some great people involved and a diverse range of children participating. (4)

This study published in 2016 is a long read and has a lot of content to digest through. It attempted to test if the Lactobacillus Plantarum probiotic strain could help with Anxiety via the gut and brain connection. The study interesting because it was conducted on ZebraFish which makes a pleasant change from reading about mice or rats.

The Zebra Fish (Danio Reriro) in this study were put into anxiety induced situations and also via stress induced dysbiosis which basically means an imbalance in gut bacteria. The reason for Zebra fish is because they have behaviors that are similar to the human neurological processes. They are very similar to humans in this sense.

The results of this extremely complicated study were that groups of Zebra Fish treated with the L. Plantarum probiotic strain eventually showed less anxiety related behavior compared to the Zebra Fish that did not take the L. Plantarum strain. Serotonin transporter expression was increased and so was the GABA-A receptor which are both important for mental health. (5)

It was interesting to see in the IBS study that one person experienced vertigo after taking Lactobacillus Plantarum. This could have been unrelated the L. Plantarum strain but side effects from probiotics have been known.

Some side effects include bloating, gas, stomach cramping, weight gain, headaches and more. These side effects usually pass with time and it has been noted that many of these studies lasted for many weeks. If you experience any side effects you should consult with a doctor and discontinue the use of probiotics.

By far the Best Lactobacillus Plantarum study in this guide for me was the anxiety study conducted on Zebra Fish. It's fascinating to know that we Zebra Fish share up to 84% of human genes known to be associated with human disease. Because of the similarities, L. Plantarum could have benefits for anxiety via the gut and brain connection.

I have personally suffered with a lot of Anxiety in the past and can attest to probiotics helping with my symptoms. It's important to remember that Lactobacillus Plantarum supplements should not be used as a replacement to any prescribed medication and you should consult with your doctor first for any health concerns. Nothing in this guide is medical advice and although I am a Nutritionist, I am not a Doctor.