How Long Do Probiotics Stay In Your System?

Probiotics have been studied extensively in humans, in vitro, and animals showing various benefits depending on the type of strain used.

What is less unknown is what happens when you stop taking a probiotic supplement or stop eating fermented foods.

In this guide, I will analyze two studies that will help answer the question of how long probiotics can stay in a human's digestive system.

What Are Probiotics & Prebiotics? 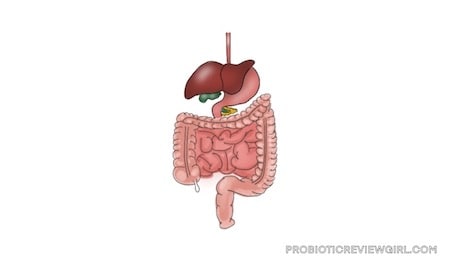 Probiotics Travel From The Stomach To The Intestines.

Probiotics are a term that describes living microorganisms that may include yeasts like Saccharomyces boulardii usually prescribed for antibiotic-associated diarrhea and gram-positive bacteria like Lactobacillus or soil-based Bacillus bacteria that may help stimulate the immune system. You can get probiotic bacteria from Kefir Milk, Some Yogurt, and Kimchi.

They are often used in dietary supplements for potential benefits but for someone with an already healthy microbiome without Dysbiosis, probiotics may not have any benefits. Prebiotics refer to a type of starchy fiber that is difficult to digest allowing it to sit in the large colon and act as an essential source of food for the probiotic bacteria.

How Long Probiotics Stay In Your System

This 2018 review article published in the European Journal of Clinical Nutrition conducted a meta-analysis of 45 probiotic studies dating back as early as 1990. Their findings were that probiotic bacteria could indeed modulate gut microbiota resulting in improvements for the immune system, bowel movements in constipation, and stool consistency in conditions like Irritable Bowel Syndrome.

The study however stated that these benefits were "transient" in nature suggesting that the probiotic bacteria did not permanently settle in the Gastrointestinal system. It was suggested that probiotics can stay in the system anywhere from 1 to 3 weeks after you stop taking them. A paper titled "How Probiotics Affect The Microbiota" published in 2019 suggested that Transient probiotic colonization could be more significant so it's not a negative that probiotics eventually leave your system.

It's important to note that there are different types of gram-positive probiotic bacteria like Lactobacillus, Bifidobacteria, Streptococcus, and Saccharomyces which is a type of yeast. The colonization times of these various probiotic strains have not been studied and they may react differently. The 1 to 3-week time frame is a good starting point but, likely, we won't know the real-time frame until more studies are carried out in humans.

How Long Lactobacillus Rhamnosus Stays In Your System

In 2000, Professor Gerald Tannock from the Department of Microbiology, University of Otago, Dunedin, New Zealand tested how long 1.6 Billion CFU of Lactobacillus rhamnosus DR20 stayed in the gastrointestinal systems of 10 healthy human volunteers through fecal samples. This was done by analyzing the fecal microflora of the volunteers 6-months before the ingestion of probiotic bacteria, during 6-months of taking L Rhamnosus daily, and then 3-months after discontinuing the use of probiotic supplementation.

Initial fecal analysis showed that Lactobacillus Rhamnosus was detected in all 10 subjects but at different levels once again showing that probiotics are not a once size fits all solution. One Participant in the group continued to have L. Rhamnosus detected in their fecal samples 2 months after stopping probiotic supplementation whilst the other 9 had extremely low levels detected. Enterococcus bacteria was also influenced as a result of the L. Rhamnosus bacteria in all of the patients and Lactobacillus acidophilus L35 was found in one participant during the experiment but this strain was then undetectable at the 2-month mark.

Whilst the popular belief tends to be that probiotic bacteria can stay in your system for up to 3 weeks after discontinuing their supplementation it should be noted that this number is based on one review paper from 2018. A second paper from the year 2000 testing the single L. Rhamnosus strain in 10 participants showed that one person did continue to have the bacteria in their system 2-months after stopping probiotics.

This seems to suggest that 10% of people could indeed for some unknown reason continue to have probiotics in their system for far longer than 1 to 3 weeks. If different single strains were studied at varying colony-forming unit counts it's also likely that more interesting data on how long probiotics stayed in the microbiome would be discovered. The one fact we do however know is that for most people, probiotic supplementation does provide transient colonization and they may need to be taken regularly.