H. Pylori infections can range from annoying to potentially more serious later on in life if left untreated. Ulcers are just one of the potentially painful issues that often arise.

In this probiotics for Heliobacter pylori guide, I am going to share my meta-analysis of the probiotic strains that have the highest efficacy. I will be sharing the highest-quality studies that used human participants.

Research by the Department of Biological Science and Technology, China Medical University, Taichung, Taiwan was published in 2021 looking at if Lactobacillus Rhamnosus JB3 was able to inhibit Helicobacter pylori infection in a vitro setting. The opening statement claimed that some Lactic Acid bacteria could be beneficial against the infection and  that eradication of H. Pylori infection could prevent gastric cancer in some cases.

Lactobacillus Rhamnosus JB3 was shown to suppress the infected AGS cells of H. Pylori at a multiplicity of infections of 25. The Interleukin 8 pro-inflammatory cell levels were reduced along with other expressions relevant to the growth of H. Pylori. The conclusion did not state that the L. Rhamnosus GG bacteria could eradicate H. Pylori but rather interfere with the pathogenesis of H. Pylori. It was noted that bacteria was only effective against H. Pylori at different doses suggesting that it may only help in early cases of a H. Pylori infection.

In 2003, a randomized controlled trial was carried out by the Department of Gastroenterology and Hepatology, Academic Hospital Vrije Universiteit, Amsterdam looking at the efficacy of Lactobacillus Casei Shirota probiotic bacteria on Helicobacter Pylori NCTC 11637.

The results were compared against 6 control subjects who were not diagnosed with H. Pylori. A 13C-urea breath test was taken at the beginning of the trial and then once again at the end of the experiment. The Vivo results showed that 64% of the participants in the probiotics group had decreased Urease activity but 33% in the control group also had a decrease. The results showed that L. Casei in a milk solution is by no means the best probiotic strain for inhibiting H. Pylori infection.

Research carried out by the School of Veterinary Medicine and Animal Sciences, Kitasato University, Towada, Aomori was published in 2002 through the FEMS Immunology and Medical Microbiology journal. The research aimed to see what specific Lactobacillus Reuteri strains were able to bind to the putative glycolipid receptor molecules of H. Pylori bacteria in hopes to inhibit or kill the H. Pylori bacteria.

Out of a total of 9 Lactobacillus Reuteri strains, only L. Reuteri JCM1081 & L. Reuteri TM105 were able to have any positive effect proving that probiotic strains cannot be used as a one size fits all approach. The main observation from this study was that it was possible in the early stages of H. Pylori colonization, some L. Reuteri bacteria sharing the same glycolipid could inhibit the growth of H. Pylori.

This 2005 randomized controlled trial carried out by the Laboratory of Microbiology, University of Chile, Santiago, Chile tested the efficacy of probiotics versus antibiotics in children infected with Helicobacter pylori. 254 children displaying no noticeable symptoms were screened with a C-Urea Breath Test 182 or 71.7% of the children tested positive which was thought to be higher than usual because of the children's lower socio-economic living conditions.

The children split into three groups with the first taking antibiotics for 8 days, the second Saccharomyces boulardii probiotic used with prebiotic inulin for 8 weeks and the third Lactobacillus acidophilus LB also for 2 months. 66% of the children taking the antibiotics had their H. Pylori eradicated with only 12% and 6.5% in the probiotic groups. The study seemed to suggest that whilst antibiotics had the best results for curing H. Pylori, the Saccharomyces Boulardii probiotic yeast also displayed some interesting properties for interfering with H. Pylori.

Another randomized controlled trial was published more recently in 2020 via the peer-reviewed Medicine (Baltimore) journal. It was carried out by Chinese researchers from Hospitals and Universities. The study tested both the safety and efficacy of the gram-positive butyrate-producing bacteria Clostridium Butyricum and soil-based Bacillus Coagulans. The study opened by saying H. Pylori could play a role in Gastroduodenal ulcers and various Gastritis related diseases.

The open-label, single-arm pilot study split 150 outpatients from the Xijing Hospital diagnosed with H. Pylori into three groups. The first took B. Coagulans, second C. butyricum, and third took both together daily for a total of 8 weeks. The per-protocol analysis on patients who completed the study to all desired requirements had treatment rates of 24.3%, 26.3%, and 32.5% suggesting that taking both probiotic strains worked best for inhibiting H. Pylori. No adverse side effects were reported in any patients.

What Is H Pylori? 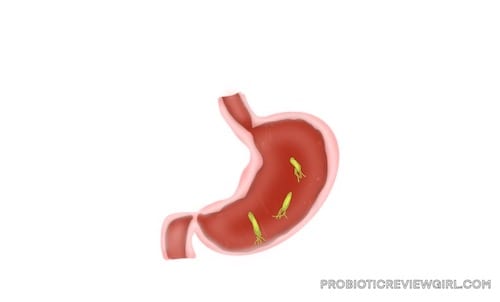 Helicobacter Pylori or H Pylori is a type of bacteria that causes infection in the stomach or duodenum (first part of the small intestine). H Pylori is considered to be the main cause of peptic ulcer disease and also causes inflammation in the stomach lining that leads to gastritis. If left untreated, then it can also lead to some cancers in the long term although such cases are quite rare.

H Pylori is quite common among humans as some studies suggest that around 50 to 70% of human population carries H Pylori within their bodies and to most people it’s harmless and doesn’t cause any illness. H Pylori infection mainly affects children under the age of 10 and children living in developing countries are especially susceptible to H Pylori infection due to crowded conditions and poor hygiene that is often associated with less developed countries.

H Pylori can spread from person to person as it’s usually found in saliva, plaque on tooth and poop. Scientists also suspect that it can be easily passed through kissing, and from hands of infected if they haven’t washed hands properly after a bowel movement. This seems to have been proved in the Saccharomyces Boulardii study where the children participants were living in a poorer less developed area of Santiago.

Probiotics are live bacteria and yeast that reside naturally in our body. Our body in general and the gastrointestinal tract in particular serves as a host for trillions of microorganisms that play an essential role in several important metabolic processes. These bacteria are essential for the functioning of our immune system and help digest and absorb the food that we consume daily.

Any Dysbioisis imbalance in the number of bacteria that are present in gut can lead to various complications and health conditions such as irritable bowel syndrome, inflammable bowel disease, diarrhea, stomach pain etc. While one can easily get probiotics from fermented food items such as yogurt, kimchi, cottage cheese, etc.

There is also the option to take probiotics in the form of dietary supplements that are sold by various pharmaceutical, health, and wellness companies.

Doctors around the world routinely prescribe probiotics for dealing with various conditions and their use and effect is backed by research as researchers and scientists are studying probiotics for almost half a century now.

What Are Soil Based Probiotics

Soil based probiotics also known as soil-based organisms or SBOs are naturally occurring bacteria that are commonly found in soil. Before the advent of modern-farming techniques, SBOs were quite common in food products and could also be easily found in the food that humans ate.

Soil-based probiotics may be good for a diverse microflora, can enhance the functioning of your immune system, can reduce side-effects of antibiotics, and can also help assist with various conditions such as diarrhea, allergies, and depression.

From my own meta-analysis on all of the studies shared in this guide it's quite clear that probiotic bacteria alone are not enough to successfully eradicate H. Pylori 100% of the time. It one study it was even shown that antibiotics had a higher success rate. Different types of strains work in different ways with specific versions of the same type Lactobacillus Reuteri strain also producing different H. Pylori results further complicating the matter. None of these studies mentioned the use of proton pump inhibitors (PPIs) like Omeprazole either.

From my analysis I concluded that Lactobacillus Casei seemed most promising but I would also recommend trying a multi-strain probiotic supplement with some Lactobacillus and Soil based bacteria. The average time for taking the probiotic in studies was around 2 months so results don't happen that quickly. Colony Forming Units were unfortunately shared so it's also unclear what CFU dosage works best. The content in this guide is not medical advice and I am not a Doctor.