Can Probiotics Survive In Boiling Tea Water? (SCAM OR NOT)

I was at the store today when I came across some Lemon Ginger teabags for sale. With one eyebrow raised, I sighed slowly staring at the bright yellow box.

In this guide, I will be sharing my findings with you and share my advice that may help your probiotic bacteria survive in hot tea.

Table Of Contents
Probiotic Strains That Can't Survive In Hot Tea
Is Probiotic Tea A Scam?
My Final Advice 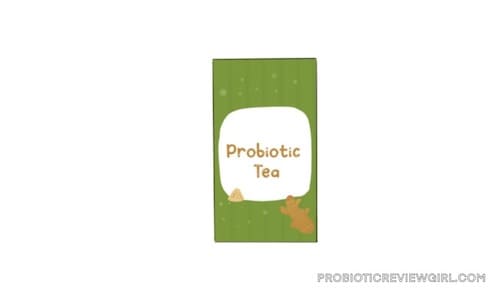 Most Lactobacillus, Bifidobacterium, and Streptococcus gram-positive probiotic strains are not heat stable and sensitive to hot conditions but not all probiotic bacteria have the same efficacy or structure. To first put things into context, some Lactobacillus bacteria have been shown to thrive in the gastrointestinal tract which can reach a temperatures as high as 39.53c too 39.67c.

2015 academic research published in the African Journal of Bacteriology Research found that Lactobacillus Casei ATCC 393 & L. casei BL2 KP123430(S2) could survive at temperatures up to 75c / 167f for up to 10 minutes. This is far lower than the 100c / 212 F boiling point of hot tea water but suggest they are some of the better Lactobacillus strains for hot tea.

This 2018 study published in the Probiotics and Antimicrobial Proteins journal claimed that storage & shipment of probiotic supplements was a risk for reducing Colony Forming Units which suggests that Lactic Acid bacteria would struggle to survive in hot tea.

Amazingly, Anthem Biosciences Pvt. Ltd the team behind this 2018 research created a thermotolerant variant of L. acidophilus NCFM probiotic bacteria that was able to survive at temperatures of 65 °C for 40 min. If a standard Lactobacillus Acidophilus strain was added to 100c boiling probiotic tea there is no chance it would survive.

This research article from 1999 isolated Lactococcus lactis, Streptococcus cremoris, and Lactobacillus acidophilus from camel milk before then looking at the influence temperature played on their growth. L. Lactis and L Acidophilus were able to grow at 37c to 40°C and the Streptococcus strain at 37c with any higher than that being detrimental to the microorganisms.

Is Probiotic Tea A Scam?

Many of the popular probiotic strains need lower temperatures for growth and the first Lactobacillus probiotic strain to be modified to resist heat was only able to survive at 65°C. Most probiotic teas however contain soil-based spore-forming Bacillus Coagulans & Bacillus Subtilis probiotic bacteria.

Chelsea Johnson from The Ohio State University in January 2010 published the results of her research into Bacillus Coagulans where she found PATP treatment of 100c for just 2 minutes reduced the Colony Forming Units of Bacillus Coagulans to an undetectable level which means the probiotic bacteria was killed.

At first glance, this may make it sound like all probiotic tea is a scam but remember it is possible to modify probiotic bacteria to be heat resistant. Bacillus Coagulans GBI-30 6086 is one of those strains that is commonly included in probiotic teas but I could not find any heat resistance studies for this strain.

Spore forming Bacillus Coagulans GBI-30, 6086® is another strain found in Twinings probiotic tea, and I did find an article in Researchgate that tested this strain and four other B. Coauglans strains at high temperatures.

One of the findings was that B. coagulans MTCC 5856 was stable at 63c for 420 minutes but that some of the other Bacillus coagulans GBI-30, 6086 strains did have a significant loss of spore count at 100c.

Studies have shown that the popular probiotic tea strain Bacillus Coauglans can grow at temperatures as high as 65c which is far higher than most standard Lactobacillus & Bifidobacterium strains can. If you ever see any probiotic tea bags with Lactobacillus bacteria then there is a high chance it is a scam.

Probiotic tea is not a scam but if you are going to boil water for your probiotic tea, you should absolutely give the water some time to cool down to at least 65c before pouring into your cup.. This may give your Bacillus bacteria the best chance of surviving. In my personal opinion, there are far better ways to get multi-strain probiotic bacteria than from probiotic tea. Kefir milk and Kimchi are just a few examples.