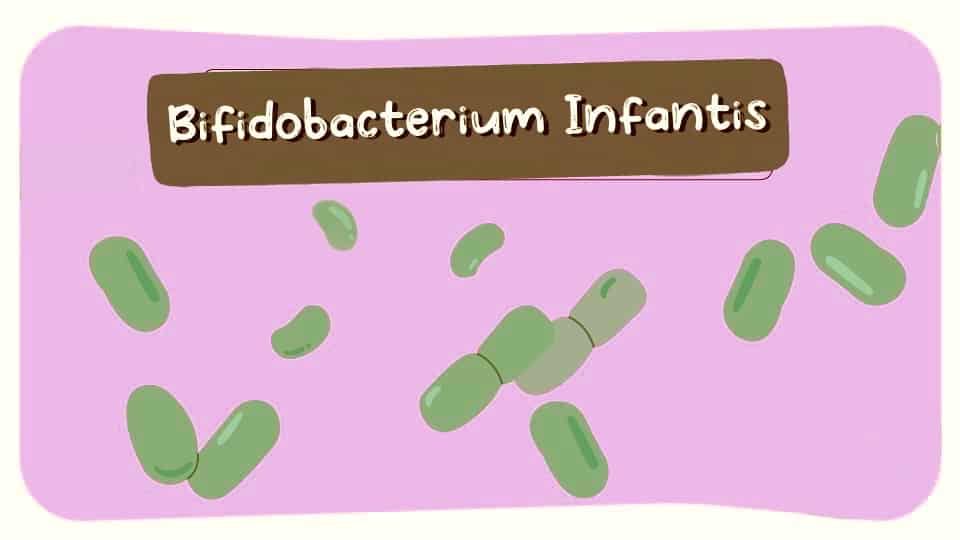 Bifidobacterium Infantis is a gram-positive, spore-forming type of probiotic bacteria that belongs to the Bifidobacteriaceae family.

The strain is usually found in both the gastrointestinal tract and feces of humans which shows it's ability to survive in the human microbiome.

In this blog post, I will delve into the various clinically studied benefits of B. infantis and you will see why the name infantis comes from it's benefits for infants.

The study showed that factors released from Bifidobacterium infantis (BiCM) can have a positive impact on intestinal epithelial cell permeability and tight junction proteins which are both relevant to Leaky Gut Syndrome.

Inhibition of ERK prevented the BiCM-induced increase in transepithelial resistance and attenuated the protection from TNF-alpha and IFN-gamma.

These findings suggest that BiCM has the potential as a therapeutic agent for improving gut permeability and reducing inflammation in colitis but it needs to be studied in humans to confirm this.

The 2022 study found that Bifidobacterium infantis is less abundant in the gut of children with severe acute malnutrition compared to healthy children based on previous studies in Bangladesh.

A clinical trial was conducted in which B. infantis was given to malnourished infants with or without human milk oligosaccharides.

The intervention increased the abundance of B. infantis in the feces of malnourished infants and promoted weight gain showing it's survivability in the infants gastrointestinal tract.

One strain, Bg_2D9, showed superior fitness over the commercial B. infantis strain and may be a potential treatment for malnutrition in infants but further clinical testing is needed.

This study aimed to confirm the efficacy of the probiotic bacteria Bifidobacterium infantis 35624 in a large-scale, multicenter, clinical trial of women with irritable bowel syndrome (IBS).

The study also aimed to determine the optimal dosage of the probiotic for administration in an encapsulated formulation with some interesting findings proving that a higher CFU count isn't always better.

After a 2-week baseline period, 362 primary care IBS patients with any bowel habit subtype were randomly assigned to either placebo or freeze-dried, encapsulated B. infantis at a dose of 1 Million, 100 Million, or 1 Billion CFU/mL for 4 weeks.

The study found that B. infantis 35624 at a dose of 100 Million cfu was significantly superior to placebo and all other doses of Bifidobacterium for the primary outcome variable and other IBS symptoms.

The improvement in global symptom assessment exceeded that of the placebo by more than 20%. The other doses of probiotics were not significantly different from placebo, and the 1 Billion dose was associated with significant formulation problems.

No significant adverse events were reported. The study concluded that B. infantis 35624 is an effective probiotic for relieving many symptoms of IBS, and the optimal dose for administration is 100 Million CFU delivered in a capsule.

In this review published in 2015, researchers from the University of California discussed using Bifidobacterium longum subspecies infantis (B. infantis) to digest and consume human milk prebiotics.

The research highlighted the numerous benefits of B. infantis in shaping the infant's intestinal microbiota and its potential to improve health outcomes in premature infants based on previous studies.

The research published in the peer-reviewed Pediatric Research journal concluded that the use of B. infantis probiotics offers a new opportunity for manipulating the infant intestinal microbiota.

The 2022 study found that Bifidobacterium infantis EVC001 is a safe and effective probiotic for improving gut health in preterm infants.

The probiotic was able to colonize the gut and increase the abundance of bifidobacteria capable of metabolizing human milk oligosaccharides, resulting in improved utilization of human milk.

No adverse events or tolerability issues were reported in the infants who received the probiotic and these findings suggest that B. infantis EVC001 may be a valuable tool for improving the gut health and nutrition of preterm infants.

This exploratory trial aimed to determine if the probiotic Bifidobacterium infantis natren life start strain (B. infantis) could affect the clinical course and pathophysiological features of patients with untreated celiac disease (CD).

The study published in the peer-reviewed Journal of Clinical Gastroenterology enrolled 22 adult patients with CD who were randomized to receive either B. infantis or a placebo for three weeks while consuming at least 12 grams of gluten per day.

The primary outcome was a change in intestinal permeability, and the secondary outcomes were changes in symptoms and immunological indicators of inflammation.

The study found that B. infantis had no significant effect on intestinal permeability, but it did improve symptoms and produced some immunological changes in the patients.

These findings suggest that B. infantis may alleviate symptoms in untreated CD and that it's not a good strain for leaky gut syndrome but further studies are needed to confirm these observations.

Further research is needed to fully understand the mechanisms behind these benefits and to optimize the use of B. infantis as a probiotic in infants and other populations. This probiotic strain should not be used as a replacement for any prescribed medication and the content in this post is not medical advice. I am not a Doctor.