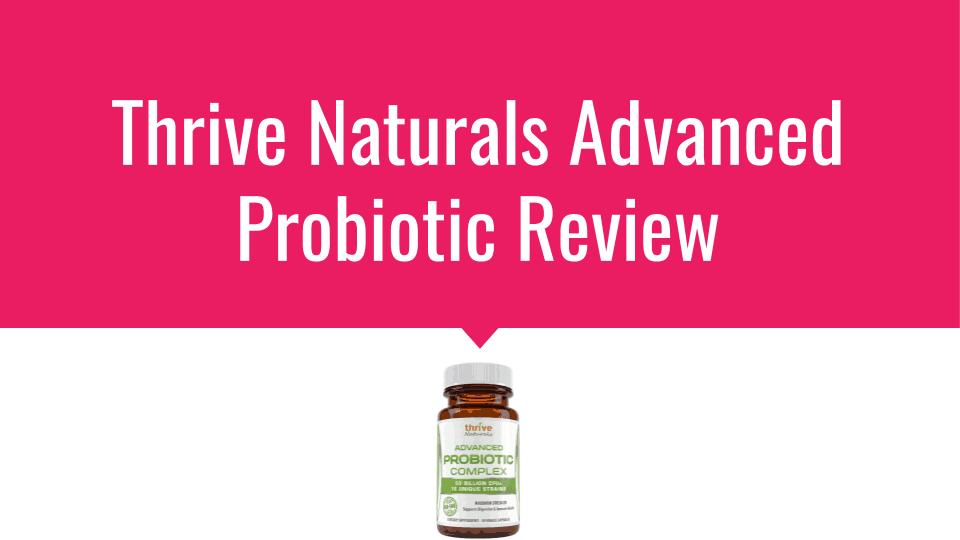 I came across Thrive Naturals Advanced Probiotics while looking for a solution to my yeast infection. A friend told me about Thrive Naturals Advanced Probiotic, and I decided to try it as it may help me get rid of the yeast infection and other stomach issues. In this review, I’ll share my personal experience with this product and will discuss every aspect of it in detail.

Thrive Naturals Advanced Probiotic Complex is one of the most potent probiotics out there, which is very highly rated for its effectiveness. It contains a potent dose of 50 billion CFUs, which are further bolstered by the presence of 16 unique strains. This is the same CFU count as another good probiotic called Stonehenge Health Dynamic which I have tried and reviewed already here on ProbioticReviewGirl.com. If that is too strong for you, I have also tried Probiotic's One Daily Support which was weaker and had minimal side effects.

Thrive naturals Advanced Probiotic Complex was developed by Thrive Naturals, a company founded in 2013 to help people live life to the fullest. Thrive Naturals triple checks every product for quality and potency within their GMP certified lab, which is also registered with the FDA and is based in the US. The company also sells other products aimed at weight loss, increasing cognitive ability, and detoxification of the body.

Thrive Naturals Advanced Probiotic Complex is priced at $43.95 per bottle. You can also save some money by buying in bulk as the company offers packages of 3 and 6 bottles, respectively, which allow a buyer to save significantly. 3 bottles, if purchased together, would cost $118.95 or $39.65 per bottle, while 6 bottles cost $199.98 or $33.33 per bottle. Thrive naturals probiotics comes with a 1-year money-back guarantee as the company has a no questions asked money-back guarantee which is valid for 1 year from the date of purchase.

The addition of several potent strains makes it a very powerful probiotic. Some users may suffer from health issues if their body is unable to deal with such a potent dose of probiotics. 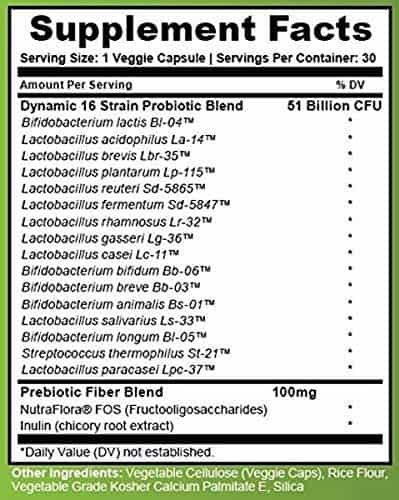 I decided to try Thrive Naturals Advanced Probiotics Complex after a close friend recommended it as a solution to my ongoing yeast infection and stomach issues. I saw some relief from stomach issues after using it for a month, but my yeast infection became even worse, which is contrary to the expectations of a user.

Probiotics are known to prevent or at least reduce yeast infections. In my case, the results were quite the opposite as taking Thrive Naturals Advanced Probiotic Complex resulted in even more severe symptoms of yeast infection. The tablets are also a bit difficult to swallow, and some people may feel a strange taste in their mouth after taking it. I used to take it on an empty stomach as several users told me that probiotics work best when taken on an empty stomach once you wake up in the morning. Although, others say that you can take a probiotic any time during the day and it works irrespective of the fact, whether you take it on an empty stomach or not.

I also suffered from some side effects at the beginning. These included stomachache, nausea, flu, and constipation when I started taking it, although most of these symptoms were temporary and lasted only for the initial 3-4 days. I suspect this has to do with the intense nature of strains used in this probiotic supplement, along with the high cell count of 50 billion.

I was also somewhat put off by the aggressive selling tactics used by the company. On the order page, as they show you only the price per bottle when you order a pack of 3 or 6 bottles. You get to know about the total amount only when you initiate the checkout process. The company tries to show as if you are saving a significant sum per bottle by buying in bulk. This feels shady and misleading marketing tactics to sell their product to unsuspecting buyers.

Thrive Naturals Advanced Probiotic Complex is a powerful probiotic dietary supplement that did help me deal with my stomach issues.  It may or may not suit you as this probiotic is quite strong and uses some potent strains, which may be too much for some people.

Stomachache and other conditions which I felt are considered common side effects of probiotics. I was lucky I only suffered from side effects, only during the initial days. Other users claim that they had to deal with these issues permanently and were relieved only after they've stopped taking Thrive Naturals Probiotic capsules.

My yeast infection got even worse after taking this probiotic supplement, and this is one area where I was disappointed with this product. The cost can also be prohibitive as a single bottle remains expensive even if you buy it in packages of 3 or 6 bottles. One can easily find more effective probiotic supplements that are available at a fraction of the price which you will pay for Thrive Naturals Advanced Probiotic Complex.

So, in light of my experience, I'd advise readers to stay away from this probiotic supplement. For me, it delivered subpar results at a very high price. I wouldn't want it to increase your stomach troubles due to its intense effects.