Why IBS Is Keeping You Awake At Night

If you have IBS and have insomnia issues then you are not alone.

Many people with IBS also have trouble getting a good night's sleep.

AboutIBS, claims up to 40% of people with IBS report having sleep problems.

There have even been studies on how IBS-related sleep disturbances.

Table Of Contents
Sleep Disturbances In IBS Study
The Microbiome And Sleep Studies
Why IBS May Be Worse At Night?
5 Tips To Help You Sleep With IBS
Final Thoughts

This systematic review claimed that sleep disturbances in people with Irritable Bowel Syndrome have been well documented in many studies in the past. These disturbances include difficulty trying to fall asleep and most commonly waking up during the night to go to the toilet.

The interesting thing about this study this review was that they also claimed that poor sleep could contribute to IBS and it works both ways. By fixing your sleep, you could potentially help your IBS symptoms but also fixing your IBS could help with your sleep. More research with Polysomnography and Actigraphy tests is needed to get a clearer picture

The Microbiome And Sleep Studies

Frontiers Psychiatry published a study in 2018 titled the role of the microbiome in insomnia and their claim that this was a result of the gut & brain connection, nutrient metabolism, and immune function.

They claimed that over 50% of people who have IBS have depression, anxiety, or sleep problems. The flora in the microbiome does have an effect on circadian rhythms and Clostridiales, Lactobacillales, and Bacteroidales bacteria in the microbiome can influence it.

In short, it's important to have a diverse healthy gut flora for your circadian rhythm and bacteria like Lactobacillus / Bifidobacterium are important in the production of GABA. This is vital for sleep because it was found that those with insomnia often had an abnormal expression of GABA mRNA. 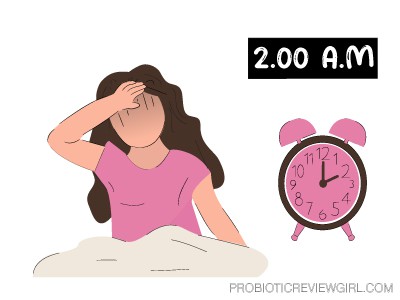 This next study published one year later in 2019 went further in their research looking at the gut microbiome bacteria diversity is associated with sleep in humans.

The original inspiration for the study was the idea of how the gut-brain microbiome influences health.

The scientists in this study hypothesized that it could also influence sleep because of growing evidence. There have however been a lot of conflicting studies on sleep and the microbiome.

This study measured sleep over a long period compared to others that measured it for shorter times and they concluded that there was a correlation between microbiome diversity and the quality of sleep efficiency.

They ended the study by saying there was promise for manipulation of sleep quality via the microbiome.

Why IBS May Be Worse At Night?

The reason for why your IBS is worse at night first could be down to quite a few different reasons and on what type of IBS you have. Here are some common causes that make IBS worse at night.

I find with my clients that these tend to be some common causes of IBS that are worse at night. The gut and brain axis may contribute to the worsening of IBS at night and this may be true if you find yourself unable to switch off your thoughts when the lights go off and your eyes are shut.

5 Tips To Help You Sleep With IBS

The best tip for helping you get a good night's sleep with IBS will depend on what the particular reason your IBS is making it hard to sleep at night.

For me personally doing everything in this list and then taking a probiotic supplement was what helped me sleep like a baby and get my IBS under control.

Studies do seem to indicate that there is some connection between IBS and Sleep but some studies are conflicting so more research is needed on men and women. One thing we do know is that IBS can worsen sleep and poor sleep can worsen IBS which is a bit of a cruel cycle to get into.

My advice to end this cycle would be to avoid trigger foods, meditate multiple times per day, drink peppermint tea before sleeping and take a good quality probiotic supplement for at least 30 days. Most importantly don't lose hope and give up! It's possible to live with IBS and get great sleep.