Clogged Toilet Searches Up 4950% After Thanksgiving Holidays In USA

Analysis of Google Search data revealed online searches for clogged toilets exploded up to 4000% percent in America on the 26th Of November just 2 days after their annual thanksgiving holiday feast. (1), (2)

New findings by ProbioticReviewGirl showed that historic Google search trends, predict that on December 26th and January 30th Americans will once again will be searching on how to unclog their toilets. 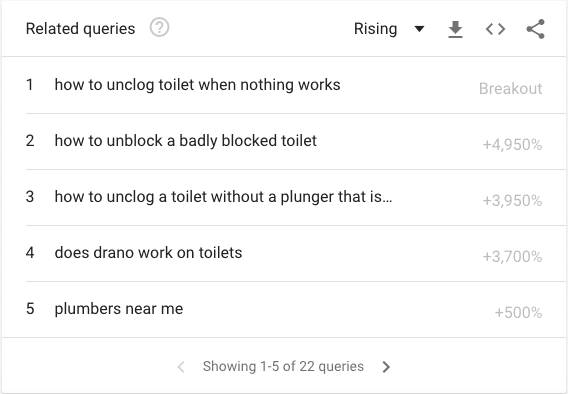 During the holidays it’s tempting to over-eat & drink to the point where you come become bloated & feel sick.

The National Turkey Society estimates that about 46 million whole turkeys are gobbled up each Thanksgiving. Around 50% of those purchased are thought to be eaten on the holiday

Whilst this isn’t usually harmful, it can lead huge bowel movements clogging your own or god forbid another persons toilet.

Official guidance from Mayoclinic states, women should try to eat at least 21 to 25 grams of fiber a day, while men should aim for 30 to 38 grams a day.

In terms of dietary changes there isn’t much you can do other than eating smaller meals in line with your recommended daily fiber intake.

Going for a walk after your meal may help speed up digestive transit time but this may just result in your toilet being clogged sooner rather than later.

If you have gotten to the point where your toilet is clogged and you don’t have a plunger. Try flush your poop with a vinegar & hot water solution. Failing that, you could always try calling a plumber.

A toilet won’t unclog by itself so leaving a toilet at your friends house clogged whilst you head on home isn’t a great idea.